The "Un-Othering" of Crime: A New and Impressive Anti-Rape Campaign

Election season always brings with it an intensified focus on the quintessential modern American citizen according to Jonathan Simon: The victim. The Attorney General race, and the candidates' websites, are full of references to contacts with the "community", defining "community" as one of potential victims. This approach, supposedly, is the antithesis to a "soft on crime" approach focusing on coddling the offender and absolving him or her of all responsibility for the crime. This approach is often accused of "blaming the victim".

Reality is a bit more complicated than that.

There is something that brings together the stereotypical "blame the victim" and "tough on crime" approaches, even though they appear to be antithetical, and that is a sense that crime, as well as victimization, is a phenomenon that only occurs to "others". Victims of rape, for example, are either complicit in their own victimization through scandalous sexual behavior, or angelic creatures whose tragic fate calls for dramatic displays of legislative punitiveness. Rapists, on the other hand, are either predetermined biological beasts, or evil, conniving men. None of these people--assailants and victims--are real, and none of these scenarios go to the heart of what happens in most rape scenarios, in which the victim and the perpetrator know each other.

Which is why I absolutely love the new anti-rape campaign under the slogan "my strength is not for hurting". Propagated by Men Can Stop Rape, the campaign addresses common scenarios and offering directives for sensible, considerate behavior. Here are some examples: 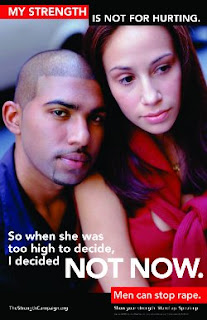 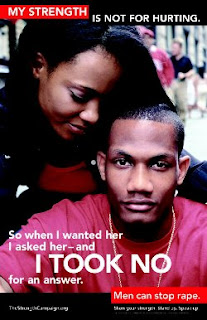 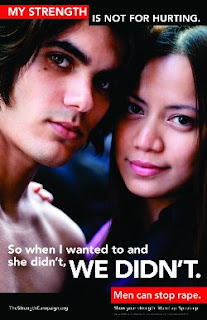 Here is some of what I like about this campaign:

1. These posters are full of realistic scenarios in which any man, not just some pathological monster, could be raping a woman. Since we think of rape as a heinous crime, some may find it difficult to identify sleeping with an intoxicated woman, or choosing to ignore lack of full consent, as rape. These posters bring it home.
2. For once, full responsibility is placed on the shoulders of the potential assailants, as those in the best position to stop the bad situation from happening.
3. This campaign is a reminder that rape does not happen in some far away parallel universe, but in dates, and parties, and various other everyday circumstances.
4. Note how the posters endorse an image of masculinity which fosters responsibility, communication, and regard for the other person's feelings, instead of glorifying violence and humiliation.

In some ways, this is the natural complement to self defense programs such as Impact Bay Area, which empower people with the knowledge they need to get out of bad situations without placing blame or responsibility upon them. Impact, and MyStrength, are a successful pitch because they speak to real people about real phenomena and avoid the trap of stereotypes and cliches.
Posted by Hadar Aviram at 12:38 PM

Here we go again. This is merely a re-packaging of the "no means no" campaign that sounds good in theory, but doesn't work in practice. The truth is that "no" does not mean "no." It can mean a variety of things, and both men and women know exactly how slippery that word can be.

It's easy to say, "why can't men just get it through their heads that no means no?" The reason is that women's behavior, brought about by the pressures of a society that extols chastity as a virtue, teaches men otherwise. That is to say, women have long been pressured into reflexively saying "no" because saying "yes," especially saying "yes" too easily, sets them up for the contempt of their peers. So we pull out the "no" in times of "maybe," "ok, I think," "not just yet," "ask me some more," and, of course, "no."

The author says that the campaign is good because it places all the responsibility on the "assailants, who are in the best position to stop the bad situation from happening." But the target audience for this campaign is NOT the premeditated rapist who jumps out of the bushes, but the unthinking or unknowing guy who thinks his girl "really wants it" despite her claims to the contrary.

If you REALLY want to reduce the incidence of rape, especially date rape, then forget about trying to apportion responsibility, and instead go with what works. To that end, you should arm the woman with an unambiguous word -- like, say, "rape."

Any man who proceeds after a woman says "if you continue, I would consider this rape" is a rapist. Not a whole lot of ambiguity there. We should teach kids, and everyone, that there's an absolute word out there -- "rape" -- that is a barrier not to be crossed, unless you want to go to prison.

The problem, naturally, is that such a paradigm is not politically correct as it places the burden on the female. My feeling is that sacrificing a little PC for fewer rapes is a pretty good tradeoff. And really, if women can say "no," then we can also say "rape," right?

Wrong, I think, Anonymous. Part of the problem is that you expect people to be able to identify and label situations that are by definition difficult to label. Expecting women to use the word "rape" in a date or party scenario is making unfounded, and I believe ultimately untrue, assumptions about one's ability to be assertive in situations that in themselves deprive women from assertiveness.