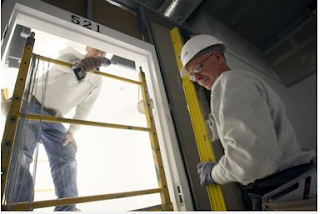 (image courtesy Cory Morse from the Grand Rapids Press)
The Michigan dream, which encountered some serious hurdles before getting back on track, is apparently becoming reality. Via Sara at the Prison Law Blog, here are some details about the preparations to receive California inmates at this new Michigan facility:

As The GEO Group Inc. prepares to reopen the site once known as a “punk prison” for youth convicts, the California Department of Corrections and Rehabilitation is getting ready to send nearly 2,600 inmates here to help solve the state’s prison overcrowding.

This time, the inmates will not be deviant youth, but adults who ran afoul of California law for a variety of reasons.

The prisoners coming to Baldwin as part of a $60 million-a-year contract with GEO will be medium-security inmates deemed not extremely dangerous. Still, their backgrounds may include everything from murder to sexual assault.

Michigan has been hailed as a model for inmate population reduction. Apparently, these commendable steps have put them, and GEO corporation, in a position to benefit from our failure to act similarly.
Posted by Hadar Aviram at 6:13 AM