"A Crime Was Definitely Committed on this Case, But Not By Me." 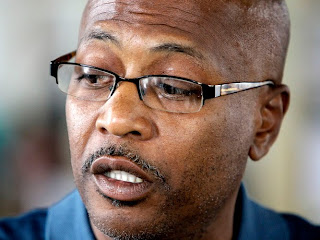 (photo by AP's Patrick Semansky, courtesy NPR)
This week, the Supreme Court decided Connick v. Thompson. The decision received some justifiably scathing critique, and this morning, an eloquent, moving response from John Thompson himself, the man who spent eighteen years in prison, most of them on death row, for a crime he did not commit, because of prosecutorial misconduct. For an excellent summary of this distressing affair, and of Thompson's dramatic last-minute acquittal, I recommend the excellent NPR coverage. It's difficult to provide a short version, but the facts are, in essence, as follow:
Thompson got arrested for murder and subsequently charged with an unrelated burglary. The prosecution decided to proceed with the burglary trial first, because a conviction would rule out Thompson's testimony in the murder trial and would allow them to seek the death penalty. They did not reveal to the defense several important pieces of exculpatory evidence, including a blood sample taken from the crime scene. Thompson was convicted of burglary, did not testify in his murder trial because of the conviction, got convicted of the murder, too, and sentenced to death.
A month before his execution, a private investigator managed to unearth the blood sample hidden almost twenty years before. The blood type did not match Thompson's. Thompson was retried and acquitted of all charges.
Unbeknownst to Thompson at the time, several years before the discovery - when he had already been in death row for years - one of the prosecutors, diagnosed with a terminal illness, revealed to another prosecutor that he had withheld the exculpatory evidence. Now aware of the misdeed, no one else in the prosecutor's office had done anything to bring this information to light. After his exoneration, Thompson sued the prosecutor's office for damages under Section 1983. He was awarded 14 million dollars in damages by a jury. The decision was appealed to the Supreme Court.
Justice Thomas's opinion was that the prosecution's failure to disclose the exculpatory evidence did not constitute a general flaw on the municipal/organizational level. The opinion states that this was a personal, intentional misdeed, and that there was no duty to train attorneys in discovery rules beyond what they learned in school. Justice Scalia's opinion is even more alarming: He says no discovery violation was committed, at all. Justice Ginsburg's dissent points out a pattern of prosecutorial misconduct at the office, arguing that better training might have prevented this tragedy.
Here are my two cents about this: The opinion and concurrence are wrong, empirically and morally. But the dissent also misses the point. Whether a given discovery error, or any other prosecutorial error, stems from negligence, lack of training, or intentional deed, it occurs within the fertile Petri dish of prosecutorial organizational culture.
Classic social science courtroom research in the 1960s and 1970s focused on "the courtroom workgroup": Judges, prosecutors, and defense attorneys. In ethnographical studies of these groups, scholars have consistently found a strong adherence to the organizational culture of the office. One "goes native" upon starting to work there, and it impacts not only one's value system, but also how one reads criminal cases.

It's as if prosecutors are trained to see the faces and defense attorneys the vase, or vice versa. Prosecutors are trained to look at convicting evidence and at the "convictability" of the case. Defense attorneys are trained to find flaws in the police files. After a while - and it really doesn't take much - it becomes a second nature. Very little crossover and cross-pollination occurs, and as a result, ironically, the people in charge of spotting exculpatory evidence are prosecutors, who would naturally be less inclined to notice its exculpatory nature.

I sometimes run a little experiment when I teach our criminal law concentrators. Following this interesting experiment, I show them this video of a police chase and ask them several questions: Whether they think the driving was dangerous to the driver, the police, the public, and whether ending the chase in a way that endangered the driver was justified on the part of the police. Without fail, every year the classroom splits along several demographic lines, the notable being people who have interned in prosecutorial offices and in defense offices. Not only is there a split on whether the behavior was justified. There is a split about the facts; they have been socialized to perceive the facts in different ways.

This is what I think is at the bottom of this. One man's willful act of deceit gets support by others, who are too lazy/obtuse/corrupt to report, but all of this cannot happen without a culture that has educated them to dehumanize and disbelieve defendants, even in the face of evidence to the contrary. This cognitive failure is not an aberration; it is the natural outcome of a hyper-adversarial system, in which prosecutors basically run the show.

The bottom line is: Justice Thomas is wrong. Justice Scalia is even more wrong. Thompson should have prevailed. However, I am much less optimistic than Justice Ginsburg, and truly believe that no amount of training could have helped here. What is needed is more socialization, starting in law school and continuing, into the thinking patterns of the other side. Prosecutorial offices should hire more people with defense experience and vice versa, and those people - trained into the ways of thinking of the other side - should run training programs. Law school should emphasize the importance of arguing both ways, not as an empty exercise in fancy rhetoric, but as a tool for improving perception. The bar exam should place more weight on the performance exam, asking future practitioners for persuasive memos in both directions. And, of course, toning down our farcical, game-show-like enthusiasm for hyperadversarialism would help, but that may not happen in my lifetime.
Posted by Hadar Aviram at 3:47 PM

I've expressed my substantive disagreement with your opinion on the legal outcome case itself (largely centered on the Supreme Court's role in reviewing and making law and not acting as a court of general "do-goodering at large", especially not "empirically and morally"). You might consider that if you are correct, and that "no amount of training could have helped here", then, logically, Thompson's section 1983 claim is effectively eviscerated. (None of this is to say that I don't think Mr. Thompson is due some sort of compensation, and I think that some sort of scheme like that set up in the Texas law discussed here is worthwhile: http://www.economist.com/node/18530358?story_id=18530358&CFID=167994531&CFTOKEN=28983767 , I just agree with the Court that there's no section 1983 violation here).

That being said, on the main point, I'm reminded of Sun Tzu's advice to "know your enemy and know yourself, that you will not be imperiled in a hundred battles." In any adversarial setting, being able to see the situation through the eyes of the opposition is critical to success (Robert McNamara made the same point, to empathize with your enemy, in "The Fog of War", the documentary he did with Errol Morris several years ago, and he had learned that lesson the hard way). We're simply better lawyers for being able to size up our cases through the eyes of our opposite numbers. Such an exercise may even be something of a minimal expectation of competence for litigation work, in my view. It's particularly incumbent on a prosecutor to be able to look at things in a holistic way, given that office's additional ethical and public responsibilities.

I don't want to tread towards regional prejudice or ignore political realities, but I do wonder to what extent the war on crime and the political attitudes and posturing it has engendered has worsened this problem. Rather than the professional and ministerial ideals we might like to (or be expected to) maintain, prosecutors in too many places seem to be willing to substitute posturing and politics for justice, and the public often seems too willing to enable them, probably especially where a murder conviction and a death-row case, and the attendant headlines, are concerned. Representing "the People" and serving as a "minister of justice" is a responsibility, but it seems at worst that it can get warped into an entitlement.

Tentative suggestion: it could become an expected part of criminal practice for both prosecutors and defense attorneys to do a regular "rotation" on the opposite side of the courtroom, actively switching roles to see how the other side works. There would have to be some protections in place or allowances made to existing rules of professional conduct, and perhaps participation would be limited to particular proceedings (not expecting dyed-in-the-wool prosecutors or defenders to handle capital trials, for an extreme instance), but it would probably go some way to addressing this problem.

Tom, I disagree about the evisceration. Compensation in a quasi-tort suit is not only for the purpose of generating training. It is due as punishment for the misdeed. Moreover, while lip service to training won't happen, it might make people think more closely about who they hire, which I think may be more important here. As to the grounds for ruling in favor of Thompson, a training theory was not even necessary here. If you adopt the findings about organizational culture, then the four prosecutors who hid the evidence acted within their perceived municipal mandate.

Re the rotation idea, some countries actually work that way. Queen's Counsel in England, at least until recently, would work both sides, and would be appointed to a side on a case-by-case basis.

"Compensation in a quasi-tort suit is not only for the purpose of generating training. It is due as punishment for the misdeed. Moreover, while lip service to training won't happen, it might make people think more closely about who they hire, which I think may be more important here."

Right, but if no additional training would have prevented the injury Mr. Thompson suffered, then he loses. A 1983 plaintiff proceeding against a municipality has the burden of proving a direct causal link between a policy or custom and the alleged Constitutional deprivation. Canton v. Harris, 489 U.S. at 385.