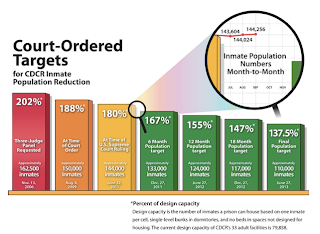 December 27th was the first benchmark for reporting the progress in prison population reduction to the federal three-judge panel. CDCR's press release on the matter reports:

This comes fairly close to the 167 percent set by the federal panel, and CDCR is confident that it can meet the June 12 benchmark. More data and the graph are available here. Here are the actual numbers of inmates, measured weekly: 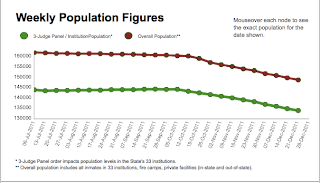 Make no mistake; 169.2 percent capacity is still very, very overcrowded. But it is, indeed, an improvement from the statistics that started off the litigation. What remains is to figure out how this has impacted county jail population. If the realignment has merely displaced people, or worse, increased their numbers elsewhere, the trend has not really been reversed, and we may be looking at a county-level version of Plata at some point in the future.
Posted by Hadar Aviram at 8:44 PM