The initiative to allow voters to reform the Three Strikes Law has qualified to be on the 2012 California ballot.

What is this about? The full text of the initiative is here, and as a careful read will show, this offers considerably less than ardent activists against mass incarceration would hope for. The opening, as is customary in anti-punitive proposals, reads as being extremely punitive, and the rhetoric is so dense that it's hard to read through it. But let's give it a try. Here are the main premises of the proposed act:

Minor third-strikers - that is, folks with two prior serious/violent offenses but a third nonserious/nonviolent offense - will receive double the sentence, in lieu of 25 years to life.

Major third-strikers - that is, folks whose third offense is serious/violent, will still receive 25 years to life.

Even if your last offense is nonserious/nonviolent, you will be sentenced as a major third-striker if one or more of your prior strikes was a sex offense, a homicide, certain narcotics offenses, assault on a police officer, and a few other exceptions.

The time between convictions will still not make a difference.

Resentencing: Third strikers sentenced to life for a third nonviolent/nonserious offense under the old law will be allowed to submit a petition for resentencing within two years from the law's passage. Anyone else (third strikers in prison for violent third strikes, second strikers) cannot benefit from this provision. 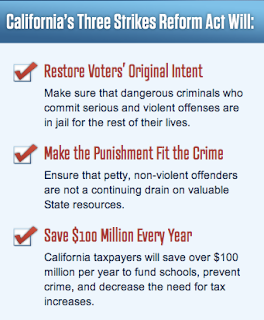 As with everything, there's a prominent financial angle. The initiative's website promotes immense budget savings and links to this report, which highlights the budgetary strain by elderly and infirm inmates such as three-strikers.

The formulation of this proposition raises a few questions. First, is this enough? It'll certainly prevent travesties such as sentencing pizza thieves to life, but it maintains three strikes for all other offenders. Despite the language preventing prosecutors from plea bargaining, there is still wiggle room, and folks with certain violent or sex convictions in their history--regardless of how long it's been since then--will not benefit from this modification.

Second, will the public safety and fiscal prudence veneer be enough to convince centrist voters that this is a good idea? I doubt that staunch Three Strikes supporters will buy into the "dangerous criminals are released because pizza thieves are serving life sentences" rhetoric. Back in 1994, voters could have approved a more lenient version of Three Strikes; four or five of those were on the table. They chose to vote for the most punitive one they were offered. Centrists, however, might be persuaded to support this initiative if they take the trouble to read it. It'll convince them that it covers a fairly small number of cases and retains the draconic punishment structure for a variety of situations. This might be cause for calm for some voters, and cause for dismay for those supporting broader reforms.

Third, what about the advertised huge savings? The Legislative Analyst's Office report on the initiative answers that in the affirmative, estimating savings for the state system in the $100 million range. However, it also mentions that costs for local government and jails may increase by millions to tens-of-millions, albeit those costs may decrease.