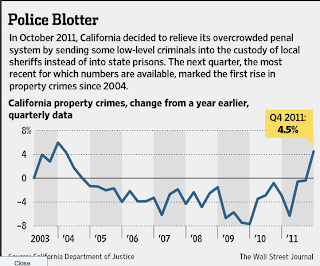 In recent days, realignment isn't getting much love. A Wall Street Journal story this week blames realignment for a recent rise in property crime. Veteran readers of this blog, read the piece (or the excerpt below) and let's find what's fishy here.

California saw a year-over-year increase of 4.5% in property crime in the fourth quarter of 2011, immediately after the overhaul, marking the first rise since 2004, according to a report from the state attorney general this fall. In contrast, property crime, which includes burglary, auto theft and larceny, fell 2.4% in the nine months before the sentencing changes stemming from a U.S. Supreme Court decision.

Known as realignment, the changes are "causing more of these people to be out in society rather than locked up," said Santa Rosa Police Sgt. Michael Lazzarini, and that could be a "pretty good reason" for the rise in property crimes. "Not only is it continued workload for the investigators, but it's also a quality-of-life issue for the citizens," he said.

Santa Rosa saw property crime rise 5% last year through November to 3,568 crimes, while violent crimes declined 7% to 585 crimes. Sgt. Lazzarini, the head of the property-crimes-investigation team, said detectives have been stretched thin since the new state law, which he neither supported nor opposed. He said he has struggled to decide which crimes to investigate.

There aren't enough data yet to back up Sgt. Lazzarini's hunch on a statewide basis. Gil Duran, a spokesman for Mr. Brown, said it is impossible to make claims about the reason for the crime increase with limited data. "Any respectable criminologist will tell you that [they] don't determine overall trends in a year or two," he said in an email. "Attempts to tie any increases to realignment are purely political."

We're given data on crime in California and on crime in Santa Rosa. What we are not given is a county-by-country breakdown. I'm not just saying this just to take pleasure in countering Sgt. Lazzarini's hunch (since when does the Wall Street Journal write stories based on police officers' hunches, anyway?) Every single report on realignment implementation shows that different counties have been dealing with sentencing reform in different ways. The crime rise might not be a result of people being "out of jail". It might be the result of releasing people after their sentences without any appropriate probation mechanisms to help them find jobs. Or it might be that the recession is hitting some counties worse than others. I want Sgt. Lazzarini to show me that property crime in San Francisco and Alameda is going up (because, supposedly, these counties "let people out") and down in Los Angeles, Riverside, and Orange (where there is an orgy of county jail building). Now that'll be special, and even then, correlation is not causation.

Police hunches are not unimportant. Police hunches in individualized, specific situations, can and do save lives. But hunches have no place when generalizing from data, and people who can't read data carefully should not drive policymaking.

So, apparently Governor Brown also doesn't buy Sgt. Lazzarini's hunch. But he has his own beef with realignment. Here's what Governor Brown said to the federal court this week, as reported by the L.A. Times:

"At some point, the job's done," Brown said at a Capitol news conference before catching a plane for Los Angeles, where he repeated the message. "We spent billions of dollars" complying with the court orders, the governor said. "It is now time to return control of our prison system to California."

The population now hovers around 119,000 — about 50% more than state facilities were designed to hold. Some prisons are at 180% of their intended capacity.

The federal courts set a June 2013 deadline to reduce that total to 137.5%. The state says it now expects to exceed the cap by 9,000 inmates. On Tuesday, Brown argued those numbers were meaningless in light of improved inmate healthcare. He further called the design capacity of the state's prisons "an arbitrary number."

But former state prisons chief Jeanne Woodward disputed the governor's assertion and said she worried that without federal intervention, the governor and Legislature would find it easier to cut funding for improvements such as new healthcare facilities.

"Without court oversight, resources tend to get taken away," said Woodward, a senior fellow at UC Berkeley School of Law.

This is the most recent attempt by the state to avoid complying with the Plata mandate. Of course the design capacity is an "arbitrary number"; all numbers are arbitrary. What makes this number magical is that it didn't pop out from the sky; it was decided by the court after hearing expert testimony about proper medical care and quality of life.

And here's another reason why this is interesting. As you may recall, the government's solution to depopulation as a response to the Plata order was to combine it with a savings measure. Plans to move inmates from state prisons to jail were in place back in the Schwarzenegger days, before Plata. Now, suddenly we're being told that further depopulation would not save money; it would actually waste money.

I don't think that realignment is the best thing since sliced bread, and I think in some cases jail conditions could be worse than prison conditions. But I do think that, done thoughtfully and thoroughly (like what these folks did), it is a step in the right direction. The state's resistance to the plan as a whole seems misguided. What the state should do instead is guide the counties, with proper fiscal incentives, to do realignment as it should be done.

--------------
Christoffer Lee, David Takacs and Aatish Salvi sent me links. The grumpy commentary is mine and mine alone.

I've been involved for over 8 years as a non-profit ministry with the CA prison system through constant correspondence, personal visits and conversations with inmates all over the state . Realignment done right would be a giant step in reducing prison population and recidivism - we know this because we endourage and support them while incarcerated and assist parolees with basic needs and mentoring and they stay out, get jobs and become productive. Unfortuntately for CDCR, they no longer 'increase the budget' if they are not in prison.