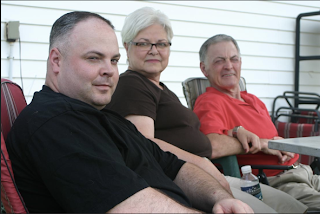 A gentle, quiet, middle-aged Canadian couple is faced with one of the most horrific dilemmas imaginable: How do you cope with having your child been murdered... by your other child?

Jennifer Jenkins, 18, was a much-beloved and popular girl, and the town was stricken with grief when she was found shot to death in her home. Suspicion quickly fell on her brother, Mason (20 years old at the time), who tried to escape the house... on a horse.

Mason, Brian and Leslie's interviews at the police station are shown on camera, as is the original 911 call from the parents who discovered the body. Mason insisted, against a mountain of condemning evidence, on his innocence and filed numerous appeals. His parents stood squarely behind him, not speaking about the events of the night of the murder for many long years, until Mason exhausted his appeals... and changed his story. And after these developments, their choices as a family are nothing short of remarkable.

Of special interest to readers of this blog is the incredible footage from Canadian prison. Mason is on friendly terms with a correctional officer, with whom he comfortably and amiably shares details of the night of the murder. Visitation happens in a natural, home-like setting: Mason's parents grill meat with him in a yard with lawn around the cottage in which they visit; they get to spend visiting weekends with him in the little cottage. In one scene that will stun U.S. viewers, Mason and his mother cook a meal in a kitchen with knives on the wall. The contrast to the visitation experience in U.S. institutions is palpable.

But the most interesting aspect of the film is its gentle, and yet painfully honest, treatment of denial and detachment, and its subtle probing into the psyche of loving, introverted people gradually uncovering untold horror and coming to terms with it in their own way. In his insightful commentary about the film, director John Kastner talks about the difficulty of conducting "a major investigation of a subject when the participants don't want to discuss it." He writes:

Brian and Leslie were generous with their time, but would they open up to us? Or were they living – as some suggested -- in a kind of Never-Never land, refusing to face facts about Mason? And how to explain their steadfast support of him, visiting him in prison regularly? (How could they talk to him? Look at him? Have anything to do with him?)

A colleague and I began meeting them in Chatham for well over a year, often twice a month, gradually peeling back the layers of their psychological armour. At first they revealed very little. But it became apparent they were more aware of the awful details of the murder than they had initially let on. They parked the information in a mental drawer, so to speak, as a survival mechanism to help get them through the day.

Eventually they decided they had bottled up their story for too long; it would be therapeutic to discuss it with someone besides a shrink who was sympathetic and who was familiar with the criminal justice system. Important to them, too, was helping other families learn from observing their own tortured efforts at healing and reconciliation.

I think the Jenkins are wonderful people. I so admire their great character and integrity. Many in their shoes would have tried to protect their son by fudging the facts to the authorities. But the Jenkins’ remarkable, often painful, honesty is apparent in their videotaped interviews with the police – not to mention in their interviews with us.

Life With Murder streams on YouTube and on Netflix.