Thoughts on Standing, Or: Why Should I Care About PRISM/mass incarceration/the Hunger Strike?

Recently, many Californians rejoiced at the news that the Supreme Court, in Hollingsworth v. Perry, would not hear conservative arguments to preserve the discriminatory Prop 8 because of lack of standing. The happiness was because of the combined effect of the decision with another decision handed that day, U.S. v. Windsor, which found the federal Defense of Marriage Act unconstitutional. The bottom line is that same-sex marriage, in the states that recognized it (now thirteen and the District of Columbia, with the addition of CA), is fully federally recognized. Nothing has changed in states that have not recognized same-sex marriage, and there are still many battles to be fought on those fronts; but some happy outcomes in the area of immigration are already happening.

But what did the Court really say about Prop 8? Rather than reaching the decision on its merits and expressing a clear opinion about the proposition's constitutionality, the Court found that, when a state government is unwilling to defend one of its laws, private citizens cannot do so in its stead--not even when said citizens were pointed to by the government as possible ideological and financial stewards of this law. The dissenters, I'm sure, would come to different conclusions on the merits, but the opinion of the court is based on what Chief Justice Roberts and others consider principles of sound government. This is particularly interesting in the context of a neopopulist, direct democracy system like the one in California, in which legislative impasse requires that ideologically controversial laws be taken up by the voters.

The five Justices were very cautious not to attach value judgments to their no-standing decision, but we are free to think whether such meanings exist. Usually, the test for standing has to do with whether the party in question has a stake in the matter before the court. And it could be argued (albeit with little help from the text in Hollingsworth) that a no-standing argument is a broader statement against the notion that same-sex marriage somehow affects--in injury or otherwise--people who are not same-sex couples. The little graphic below, which made the rounds on the social networks in the last few months, is an expression of this interpretation of lack of standing: That gay people can now marry has no injurious effect on the institution of marriage itself, so no one but the government can argue against it. 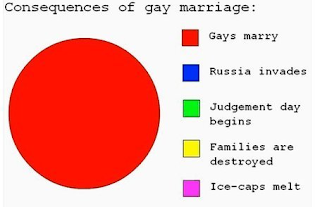 But on further thought, this interpretation of standing is not the deepest or most interesting stance on the matter. After all, that same-sex marriages may proceed in California, now with full federal backing and support, does have an effect on everyone in the state, in the sense that we all live in a more just and egalitarian society, that has taken an important step in furthering civil rights. This is why organizations such as the ACLU of Northern California have a stake in the decision, if not as official parties then at least as amici. This is not, however, a matter of technical legal standing, but rather one of moral standing; when some of us don't get our civil rights, it affects all of us in a variety of ways.

What does all of this have to do with the hunger strike? I have recently had a chance to interact with various progressive audiences, only to find out that they were unaware of the hunger strike that begins tomorrow in Pelican Bay, Corcoran, and possibly other prisons. Those who knew, vaguely, about the strike, were not well informed about the inmates' five core demands and of CDCR's new protocols' failure to address them. Very few people know that Christian Gomez, an inmate at Corcoran, died during the previous hunger strike. Very few people know that the strike galvanized agreements across races and gang affiliations. My grave concern is that, like its predecessors, this strike will receive little publicity, and the illness and possible death that might result will remain unknown and unexamined. And this is because I think we all have standing on this matter. Not in the strictly legal sense, but in the sense that treating our fellow human beings, Americans, Californians, in inhumane ways does have a detrimental effect on how we all treat each other.

What keeps us unaware of prison conditions, why do many of us feel that we lack "moral standing" on incarceration conditions? Some of this has to do with misinformation. Mainstream media does not cover incarceration frequently, though the financial crisis has begun to change that insofar as expenditures on corrections affect our wallets. Still, since incarceration does not affect everyone equally, many of us are likely to familiarize ourselves with its evils through the increasing number of new TV shows about prison (such as the new Orange is the New Black,) which will likely not tell us anything of social or political value. Even shows that purported to offer some critique of the system left its basic tenets unexamined. Moreover, prisons themselves are distant from the consciousness of those not directly affected. The disparate effect of incarceration is exaggerated by institutions like Pelican Bay and Corcoran, which are far away from major urban centers and very difficult to get to, and by the worrisome prospect of even larger, more isolated institutions.

But one should be informed, and one should care, because incarceration and segregation regimes do affect all of us  First of all, one in a hundred Americans is behind bars, and one in 36 is under some form of correctional supervision. That person could be you. While I think articles like this one are somewhat facetious--the people targeted by technology laws are unlikely to be the critical mass of inmates in California prisons, for a variety of reasons involving race, class, and enforcement priorities--those are still vast numbers of lives touched by the experience of imprisonment. But at least one must acknowledge that the vast numbers of incarcerated people mean that the experience of incarceration touches many, many lives, such as those of 2.5 million children with parents behind bars. If that child is not you, he or she is your future neighbor, coworker, and fellow citizen. Most people behind bars will, one day, be released, and it is to the benefit of all of us that they have some chance of reintegration because we all have to interact with each other, even when someone we don't know crosses our path in our gated community.

Second, even if your life has not been touched by incarceration, the dehumanization of your fellow citizens may eventually spill over to the way your government sees you. This is why the recent discoveries about phone surveillance cannot be brushed away with the supposition that, if one is not a terrorist, one is not affected by PRISM. Approaches toward human rights, surveillance and social control tend to be imported and exported across systems and institutions, and not caring about other human beings' conditions of confinement may infect conditions in schools and other places.

Third, there is the persistent question of how much all of this costs us. Even if this system could be stomached from the humanitarian perspective, is it financially viable?

And finally, there is a serious moral argument. Do you want to be part of a society that locks up people for many years, sometimes decades, for 22.5 hours a day, waking them up frequently so they get little to no sleep, with no human company whatsoever, abysmal medical care, and very poor food? Do you feel comfortable subjecting others to this regime based on partial and faulty information, particularly reports of some people on others to receive a reprieve from this same system? Do you believe tattoos and rumors to be a fair indication of gang affiliation, enough to place a person in this system for years? And do you feel comfortable with the possibility that we might have made a mistake and subjected an innocent person to years of horrific torture?

If not, stand with the hunger strikers tomorrow. Because you have moral standing.

Email ThisBlogThis!Share to TwitterShare to FacebookShare to Pinterest
Labels: constitutional rights, do something, pelican bay