New CJCJ Data: The Problem is in the Counties 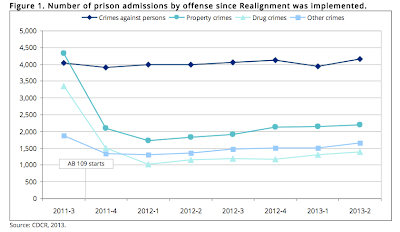 Jerry, hold your horses; perhaps a comprehensive state plan is not what we need. New fact sheets produced by CJCJ based on data from CDCR and the Criminal Justice Statistics Center indicate that the problem with reducing prison population is located at the county level.

The first fact sheet shows the county disparities in incarceration. CDCR data are broken according to prison admission rates. As the fact sheet states, "the 17 counties with higher than average prison admission rates per felony arrest have imprisonment rates 60.7 percent higher than the 40 counties with lower than average rates." Those counties, ranked from the highest to the lowest imprisonment rates, are Kings, Riverside, Butte, Monterey, Yolo, Yuba, Shasta, San Joaquin, San Bernardino, Madera, Amador, Sacramento, Kern, Tehama, Santa Barbara, Merced, and Sutter. Los Angeles County was analyzed separately because of its population size.

Following David Ball's awesome recent paper, which suggests that violence rates are a good way to allocate money to counties because they are good proxy for actual incarceration needs, I would love to see violent crime statistics on these counties, to see whether these incarceration rates are justified.

My concern is that this is actually not about an increase in violent crime. The second fact sheet from CJCJ indicates a disturbing trend of increase in new prison admissions for property and drug crimes (see graph).

Maybe we can save ourselves $350 million of your money and mine by finding a way to incentivize high-incarceration counties to incarcerate less?