Should San Francisco Rethink Its Sanctuary City Policy? The Price of "Redball' Cases

The tragic death of Kathryn Steinle at Pier 14 is senseless, brutal, and, of course, a horrific loss to everyone who knew her. And the confession of the alleged killer, Juan Francisco Lopez-Sanchez, who claims the shooting was done at random (an accident?) make this incomprehensible brutality even more difficult to bear. New discoveries about this horrific tragedy, it seems, appear every day, including the disturbing fact that the gun used in the shooting belonged to a federal agent.

As in the case of other heinous, sensational crimes, the media circus is looking for an "angle": what is this crime "about?". And in this case, they have found their angle in the shooter's immigration status. Lopez-Sanchez was not only a repeat felon (though his previous felonies were not violent) but also an undocumented immigrant, deported several times and returning to the United States, and protected from federal deportation by San Francisco's sanctuary city policies (which we discussed as they were enacted and debated here, here, and here).

These have become, over the last few days, essential ingredients for a new moral panic against undocumented immigrants, questioning the city's policy. And it is an easy target for the media: it stands in stark contrast to the trend in other states, notably (but certainly not only) Arizona, to enact anti-immigration laws that enable local law enforcement to assist the federal government with deportation--and sometimes, to do the feds' job. Some local governments' persistence in enacting and upholding these laws is particularly astonishing given the enormous costs they entail. In going against this trend, San Francisco is ripe for criticism, and indeed, everyone seems to blame everyone else: Jesse Waters blames the Democrats, the White House blames the Republicans, but what everyone agrees on is that the sanctuary city policy is to blame.

It is understandable that, in the aftermath of a terrible loss, we're looking for a way to make sense of the tragedy; we did the same just two weeks ago after the horrible mass murder in South Carolina. It is the (understandable) scourge of "red ball crimes" that they attract energy and strong feelings that lead to panic and specialized policy legislations; it is the sad reason why our sex offender laws bear the names of murdered children. But in this case--as is often the case when policies are debated in light of a "red ball crime"--questioning the policy is misguided, because Lopez-Sanchez is the exception, not the rule. 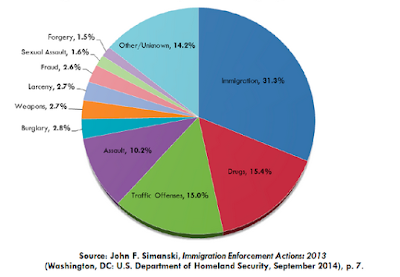 The consensus in the research community has been, for many years, that immigrants commit less crime than the native-born. This has been confirmed time and time again via different methods. As the charts above show, crime rates nationwide have fallen as immigration, including undocumented immigration, was on the rise. While this does not necessarily prove anything, it also does not prove the opposite. But other evidence is stronger: immigrants are less likely than the native-born to be incarcerated, and most convincingly, studies tracking at-risk youth have shown that immigrants actually engage in less criminal behavior than the native-born. Even second-generation immigrants, who commit more crime than first-generation immigrants, commit less crimes than the native-born. The vast majority of deportations of "criminal aliens", according to official data, are not due to serious crime--most are due to immigration, drugs, and traffic offenses. Only 8.6% of those targeted by ICE detainers have a criminal record that includes a "level 1" criminal offense, and 77.4% have no criminal record whatsoever. Apparently, the misguided public belief that immigrants commit more crime stems from a misguided estimation of their percentage in the population, and it seems to be more prevalent among less educated people who have less cultural affinity with immigrants.

The frenzied, empirically unfounded responses to Steinle's death obfuscate the real problem: undocumented immigration has been going on for many, many decades, it is an inseparable part of our political geography, and it happens, with U.S. complicity, because we need the Mexican undocumented market. The wish to draw conclusions from a terrible tragedy so that it doesn't happen again is understandable, but that does not mean we should draw the wrong ones.
Posted by Hadar Aviram at 8:04 AM

Email ThisBlogThis!Share to TwitterShare to FacebookShare to Pinterest
Labels: crimmigration