Order Without Oppression: No Police Visibility at Women's March 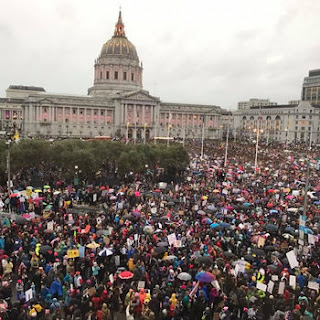 San Francisco's City Hall was lit in pink yesterday as we, more than a hundred thousand residents, rose up to protest and march against the Trump Administration and to support civil rights. It was a powerful and encouraging experience.

San Francisco was not the only city in which huge crowds came together to protest what we fear might roll the course of progress decades back, and crowd scientists estimate that the numbers of protesters far exceeded the number of attendees at the inauguration itself.

Much has already been written, and will be written, about the positive energy of the march. I particularly appreciated the sentiment of unification: rather than carving injured identities and engaging in infighting, the left came together to support civil rights, equality, diversity, feminism, queer rights--all the things that have made our great city what it is. It gave me hope not only for a national movement to take our country back from reactionary fascists, but also for my own city, engaged in bitter conflict between old-timers and newcomers. For a few hours, we were all together, marching and chanting for what we believe in: that love and tolerance are what make a country great.

But as a criminologist, the most notable experience from yesterday's march was the absence of visible law enforcement. More than 100,000 people got together, cramming some of the busiest streets in the city, and not one arrest took place. Not one expression of animosity by police. No visual police messaging to communicate that violations were expected.

I have written about protests and riots before, in the context of the protest gathering against Johannes Mehserle's verdict. I very vividly remember arriving in downtown Oakland that day and being surrounded by helicopters, police vehicles, cops in riot gear. The messaging there was clear: people were expected to be violent and difficult and the officers were ready for them. The messaging at this march was the opposite. Even though the gathering had racial justice themes, and many of the walkers were people of color, the sense that the masses should be curbed and subdued was just not there. The only visible evidence of peacekeeping we saw were a few volunteers in colorful vests, but they were not vocal or dominant. The crowd controlled itself, and it did so beautifully and peacefully.

Apparently, this experience was not unique to San Francisco. No arrests in D.C., Los Angeles and other places. A handful of arrests in localized incidents the day before.

Cynics might say that the racial composition of the marchers and protesters might have something to do with police response. I think there's a bigger truth behind that: events that promise to be peaceful, in which families march together with unifying messages, are perceived by law enforcement as being less threatening. This is not to say there aren't legitimate law enforcement concerns at such events, starting with the obvious--making sure people are marching safely and not interfering with traffic--and continuing with the fear that someone will take advantage of the opportunity to kill and wound the crowd with explosives. I would not have resented calm and respectful police officers had they been there to engage in safety and protection, and I have no doubt that there *were* such officers, and that SFPD braced itself for a big undertaking. Somehow, to the extent that they were there, they were unseen and unfelt, and that was a very powerful experience.
Posted by Hadar Aviram at 7:31 AM