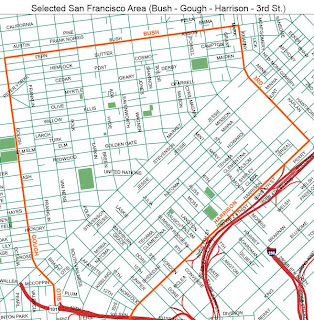 (image taken from a great report on SFmetblogs.com)

Today's Chronicle reports on the controversy regarding the sources of funding for San Francisco's Community Justice Center, scheduled to open its doors on February 2009.

The article presents the following analysis of the CJC proposition:

What it is: The measure would guarantee funding for the Community Justice Center, a special court to prosecute misdemeanors and nonviolent felonies in the area bounded by Gough, Bush, Kearny, Third and Harrison streets. It would also grant the mayor and Superior Court power to determine which crimes are handled there and expand its jurisdiction.

Arguments in favor of it: Nobody is served by the current system, which cycles perpetrators of low-level crimes in and out of jail without addressing their underlying problems, such as drug and alcohol addictions and homelessness. The court would sentence them to social services and community service to pay back the neighborhoods.

Arguments against it: The court would criminalize behavior that comes with being poor like illegal camping and aggressive panhandling. Also, the Board of Supervisors already funded the court, so what's the point of the ballot measure?

Who opposes it: The majority of the Board of Supervisors, advocates for homeless people.

Some inaccuracies in the report should be mentioned: while it would appear that the court is especially aimed at "quality of lifers", its jurisdiction is, in fact, more geographic than anything else. The court's jurisdiction extends over several blocks of the Tenderloin and SOMA. According to Commissioner Albers, who spoke recently at a town hall meeting about the CJC, the only offenses excluded from its jurisdiction would be violent felonies.

The other big issue is whether the court would lead to criminalization of poverty. Proponents argue that city residents will be entitled to the social services pre-conviction, and sometimes even pre-charging; this might ease the concerns on the part of community advocates. However, it does raise the more general issue of "widening the web".

The concept was first introduced by Stanley Cohen, in his masterful 1985 book Visions of Social Control. Analyzing, among other issues, the movement toward decarceration (we could all use some of that!), he suggests that the addition of non-incarceration, welfare-oriented sentencing alternatives carries the risk of dragging into the government's net people who would otherwise be left out of supervision. Cohen sees this aspect of the alternatives in a grim light, but your mileage may vary.

In any case, it is an open question whether, by voting for or against Prop L, you would be sealing the court's fate. As reported by the Chron, the court does count on grants, and other sources, for a large part of its operation over the first year.

Happy voting, and stay tuned for a final election post, on SF's Prop K.
Posted by Hadar Aviram at 5:57 AM

It's true,alcoholism and drugs have caused many low crimes (public scandal, riot, malicious mischief) which have been brought to court.
These low crime caused by illegal drugs and alcohol will eventually progress into something serious if drug abuse and alcoholism will not be treated professionally.