Will prisoners be released in response to prison overcrowding? 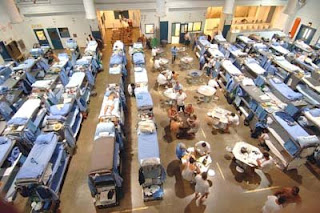 As reported on the Chron, on Monday the Federal judicial panel at the District Court heard closing arguments regarding prison overcrowding. A few snippets:

Inmates' attorneys argued Tuesday that releasing tens of thousands of prisoners is the answer.

"The entire system is collapsing because of the overcrowding," Don Specter, director of the nonprofit Prison Law Office, told the three-judge panel in U.S. District Court.

If the panel agrees, it could order the population cut by one-third in California's 33 adult prisons. That would lead to the early release of some 52,000 inmates.

But they also argued that freeing tens of thousands of inmates or diverting them to county programs would overwhelm local police, jails and rehabilitation programs. Crime would go up, and many parolees would go without supervision, they said.

The judges have indicated they support the premise that the prisons' problems stem from overcrowding. U.S. District Judge Lawrence Karlton acknowledged the "very profound effect" on counties if an early release was ordered, but also said 52,000 inmates might not be enough. He suggested that nearly half of the current 158,000 inmates may need to be freed.

"The state of the evidence is you can't solve the problem without solving the overcrowding," Karlton said Tuesday.

The governor's position is rather interesting. As we know, the most recent version of the budget included releases of non-violent prisoners, as well as cutting parole for the same population. The governor actually supported the release of 15,000 prisoners. It would therefore appear to be the case that the argument is no longer about whether to release prisoners, but how many, and how the choice is to be made.

Don Specter, and Judge Karlton, will be among our speakers at the upcoming California Correctional Crisis Conference.

releasing of prisoners, especially non-violent offenders &/or first timers is what is needed in this financial crisis we have. if the prisons are already overcrowded then why in the hell are judges sending people who have basically completed their terms of probation/parole back to jail for minor violations. It's just adding more people to an already over crowded place.

My husband is in jail right now awaiting transportation to prison, He was convicted of ex-felon purchasing ammunition. He was NOT on parol and has not been in trouble in over 5 years. He went to a shooting range to practice target shooting and was arrested at our home 6 months later . The judge gave him 16 month sentence even though he congradulted my husband for doin so good these past 5 years staying out of trouble and completely turning his life around. He is a perfect example of the 3 strike law abuse. They wane to charge him w/ his 3rd striek which would hae sent him away for life. When they arrested him they also searched our home and found Nothing illiegal.... we ave worked hard these 5 years to make a life for ourselves and our 3 yr. old daughter ... it is ridiculous that he is not home working and I have had to go back on welfare because he was our main supporter and i have health problems that dont allow me to work. The insanity has got to stop.... the prisos are busting at the seams and we need to do something about it !

So sorry to read this. The problem with inflexible sentencing is that it doesn't allow the judges more leeway in taking into account such circumstances.