More About Zen Prisons and Other Magical Gardens 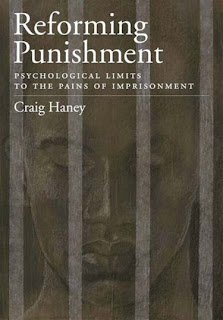 The 1960s were revolutionary years in penology; they mark a thriving period in prison research. Many big names in the field, influenced by Erving Goffman's concept of total institutions (and, more broadly, by Howard Becker's framing of labeling theory), became interested in the social dynamics of prison and its impact on human behavior. This interest in prison yielded a number of classic studies, whose findings now seem obvious to us, and who may be somewhat dated, but whose basic insights are still true.

One such classic was Gresham Sykes' 1965 article The Pains of Imprisonment, in which he made the then-revolutionary argument that imprisonment does not consist solely of a loss of freedom, but carries with it a number of other impairments to the inmate's quality of life. He named four such pains: the loss of material goods; the loss of heterosexual relationships; the loss of autonomy; and the loss of personal security. Each of these merits a discussion of its own, and since the original publication, several people have suggested additional pains of imprisonment. In his book Reforming Punishment, Craig Haney develops the idea of the psychological impact of imprisonment. Long before our current crisis, he argued that prison management and funding adversely impacted inmates and, therefore, contributed to the problems within walls and after release.

(Incidentally, Sykes' full original study, The Society of Captives, has recently come out again, with a new and excellent introduction by Bruce Western. )

As faithful readers may recall, Melissa's post a while ago highlighted the current heated debate about prison conditions in light of the initiative to end the medical system receivership; the receiver's aim to create a "holistic environment" for prisoners caught much flak from critics. One way of framing this controversy is by realizing that Sykes' point has been turned on its head; we seem to take for granted, and agree with, the imposition of pains of imprisonment in addition to the deprivation of liberty.

A good illustration of the pains of imprisonment is the comparison between the food and hygiene items offered to prisons and to other institutions. Basic comfort items are difficult to come by in prison, and families and friends who want to help inmates naturally would like to supplement these. One of the simplest ways to send a package to an inmate in the U.S., without having to face searches and confiscations, is to do so through My Care Pack, an internet service offered by Canteen. Canteen also offers food services for institutions and vending machines. I encourage you to pick a facility and browse through the products. Here, for example, is a $17.95 gift pack: 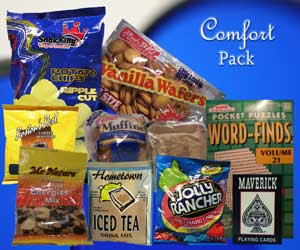 Most products sold by Canteen are quite cheap and basic. Still, in prisons dominated by gangs and a strong illicit economy, a pack like this might provide a lot of comfort. The profit margin for Canteen is significant (grad student readers will be interested in examining the price of instant ramen), but the service provided is hassle-free, in the sense that delivery is relatively painless, and freedom from administrative searches is a good thing. Obviously, other Canteen clients (restaurants, institutions, and NASCAR) get an entirely different set of offerings, for a different price range. And, naturally, prison economy does not equal communism; prisoners with more means, and more affluent supporters outside prison walls, will be living better, comfortwise, than prisoners who lack friends and relatives, or whose friends and relatives cannot afford to furnish them with supplementary goods. These inequalities, and the importance of creature comforts, are some of what fuels the prison economy, which is to a large extent driven by supply and demand for drugs (see this little piece from Prison Life Magazine). Again, this is nothing new; Lloyd McCorkle and Richard Korn provided the foundation for a discussion of the prison's internal economic system in their classic 1965 piece Resocialization Within Walls.

This commentary should not be taken as a simplistic critique regarding the meager offerings to prisoners, or a cry for more coffee brands, but rather as a way to conceptualize the fact that simple comforts, like readily available brand snacks, are not readily available to inmates. Another aspect is the capitalist concept of choice. The dazzling array of, say, toothpaste types, does not exist for inmates. Whether or not this should be a part of punishment is not really the question (admittedly, one could not accommodate full access to capitalist economy from within walls even if we wanted to); the point is that it is, de facto, part of the prison experience, which is often hidden from commentators and critics.

Craig Haney, author of Reforming Punishment, will be on the opening panel of our upcoming conference.
Posted by Hadar Aviram at 6:49 AM

So you can actually send a Care Pack into an institution? That is a welcome initiative.
Alligator Vending