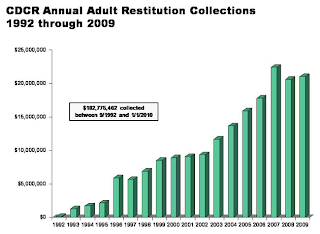 The CDCR website features a story about its initiative to collect victim restitution fees from inmates.

California Department of Corrections and Rehabilitation (CDCR) Secretary Matthew Cate today announced CDCR is on pace to set a record for collection of victim restitution orders from inmates and parolees, due to an innovative relationship with the state’s Franchise Tax Board (FTB).

A number of reforms and changes were made since the CDCR reorganization that strengthens the Department's responsiveness to victims and survivors of violent crimes.

The most significant change occurred earlier this year when CDCR and FTB entered into an interagency agreement which states that FTB will act as an agent for the CDCR in collection of victim restitution from adult parolees and discharged adult offenders.

The Interagency Agreement, signed in December, was spurred by the passage of AB2928 earlier in 2009. Victims suffer staggering economic costs as a result of crime. This agreement encompasses over $2 billion owed to more than 100,000 victims of crime. Crime victim compensation programs reimburse victims for part of this loss.

Yesterday, Jonathan Simon came to talk to my class about Governing Through Crime, and one of my students asked him how he saw the optimal role of the victim. An interesting discussion ensued: To what extent do we want to frame victims as passive citizens, expecting the state to act on their behalf? To what extent can we empower victims to act on their own behalf without crossing the line toward blaming them for their situation? Seems to me that, of all the victim-oriented policies, collecting restitution for them makes a lot of sense. It doesn't raise the same concerns that punitive legislation and participation in the criminal process raise. It does, however, raise some questions: Can money really make up for crime or harm? What role does class and money play in equalizing the leveling field and righting the wrong that occurred? And, finally, would a process of restorative justice (possibly fostered by CDCR after trial is over) do more for victims than monetary compensation?
Posted by Hadar Aviram at 7:23 AM

Email ThisBlogThis!Share to TwitterShare to FacebookShare to Pinterest
Labels: victims

Yes, a program of restorative justice would do much more to help victims, by reducing recidivism!

Restorative justice is an important component of making the victim whole and also creating a pathway for the offender to express remorse and take responsibility for their actions. This allows room for growth and change. However, it is important to acknowledge that CDCR under Matt Cates is not supporting rehabilitation on any level, including any effective use of restorative justice. He is focused on a punishment philosophy. Most of California's inmates are very poor and the piling of fines and restitution on them during sentencing increases their problems and isolation. By creating more legal procedures to punish and impoverish them, we inhibit motivation for change by sending them to underground employment which will not be subject to legal action, i.e. drug dealing. Although it is important to be financially responsible, most offenders come out of jail/prison owing thousands of dollars in fines and restitution that they cannot hope to pay. This policy needs to be changed.