Yesterday's Chron reported, in its print edition, on an issue we have discussed elsewhere: the effectiveness of Jessica's Law housing restrictions on recidivism.
Apparently, the California Sex Offenders Management Board has seriously critiqued the existing restrictions, pointing out several flaws in them, the most obvious one being the fact that San Francisco's abundance of state and parks excludes sex offenders, basically, from the entire city save for Lake Merced and Hunters Point. As a result, many sex offenders live in the street, a situation that, according to Jill Levenson, leads to instability and thus might actually increase recidivism.
The article also mentions the fact that the residency requirements are not retroactively enforceable, and therefore do not apply to people placed on parole or probation before the law took effect in 2007. It does, however, apply to people imprisoned before its enactment, per the recent CA Supreme Court decision on the matter.
The challenge? Changing policies to make them more effective might be perceived as being soft on sex offenders, a position politicians can hardly afford to take regardless of their party affiliation (and therefore propose laws such as this one or this one.)
***
Oh, and as a special bonus: We have not discussed the San Francisco Crime Lab scandal, which does not have a direct relationship to our coverage. But as it turns out, beyond lax supervision and cocaine theft from the drug lab, evidence is also in danger from an army of feral cats. I know this is a serious matter, which raises heavy concerns about due process and about the prosecutorial enterprise in general, but I could not resist: The picture below from the Sunday Chronicle is begging for a caption. 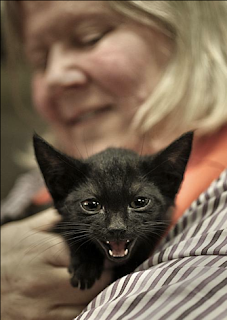 The system IS broken, but not in the sense this aurthor suggests. California's recidivism rate for first time sex offenders is "under 4%" according to the CDC.

It should be noted that research says that 93% of all new sex crimes are committed by individuals NOT on a registry but that they are family members and those known to the family. If you locked up every registered offender, you wouldn't change the 93%.

Laws based on emotion, political expeidency for vots and self aggrandizement, as well as for the purpose of ratings by the news media make for very bad law. Basically, "emotion lacks intelligence." As do the sex offender laws.

Laws who foundation is based on 'research' have been totally ignored by politicians and the news media. THEY are, in my opinion, just as responsibal for the death of Chelsa King as Gardner is.

Now we don't live in a perfect world and there are 10 to 50 mass murderes running around in this country, at any given time. However, when one of them has a sexual motive, we freak and blame every former offender as though he/she would do the same thing.

RECIDIVISM is NOT high among registered sex offenders. That is a LIE. Don't believe me. GOOGLE IT! look at the research and stop listening to politicians who just want public recognition.

We can write all the laws you want. They will not prevent anyone from committing a crime, if they are determined to do so. In fact, the harsh laws encourage the killing of a victim, because dead people cannot testify. Unless there is some kind of evidence to direct investigators to the Perp. So, how do you tell who might be dangerous? While nothing is 100 percent in this world, we must concentrate on the most dangerous.

3. The offender who DID NOT KNOW their victim.

If you notice. The vast majority of these most heinous sexual assaults, fall into 1 or all three categories. We are wasting all the resources on the low to no risk while the predators are hiding in the registry.

This is so simple and so to the point! When people say, "Well, we can't get rid of the register, what do you think we should do?" Answer, if we need a public register at all, and I truly don't think the public has proven that they can handle it, then the only ones on it should be those that fell into the categories above!
http://cfcoklahoma.org

Highlights include the following:

2.5% of released rapists were arrested for another rape,

Also the California's Department of Correction puts the recidivist rate for first time offenders at "Under 4%."

Here are the highlights of Recidivism.

The following figures on a ten-year California Department of Corrections and Rehabilitation (CDCR) follow-up study of the recidivism of 3,577
individuals convicted of a sex offense who were released from CDCR prisons in 1997 and followed until the end of 2007

The bottom line with this study is:

CUMULATIVE TOTAL OF ALL WHO HAD BEEN RETURNED TO
CUSTODY UNTIL 2007- A 10 YEAR PERIOD
3.38% were returned to custody with a new sex crime. By the third year 3.21 re-offended and the remaining seven years produced the remaining 0.17%