The Religious Life of Inmates 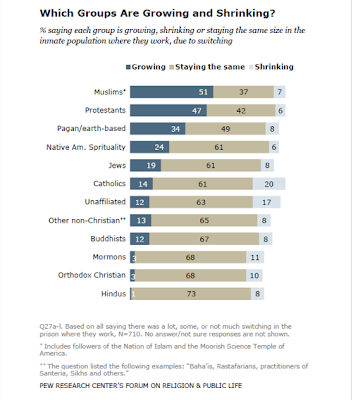 A recent study conducted by the Pew Forum on Religious and Public Life surveyed prison chaplains in all 50 states.

Most of the chaplains surveyed  (71%) are Protestant Christians, so it is perhaps not surprising that Muslims top their list of concerns about religious extremism among inmates. But there are some other interesting things going on there. For example, look at the graphic to the left. Not only is there frequent change in inmates' faith, but some religions are less stable than others in terms of their membership.

For a non-Christian take on the results of the survey, read Jason Pitzl-Waters' lucid commentary in his blog, or some remarks from Pagan chaplain Patrick McCollum, whom we discussed here before.
Posted by Hadar Aviram at 9:02 AM