I am visiting Vitoria, Brazil, as part of a collaboration between Hastings and Universidade Federal do Espirito Santo (UFES), who has invited a few of us to offer a week-long comparative procedure mini-course. I'm teaching policing, courtroom processes, and American incarceration, so naturally I've been very curious about the Brazilian criminal process.

Our hosts have very generously taken me to see some fascinating things. Yesterday, we visited the Appellate Court of the State of Espirito Santo. 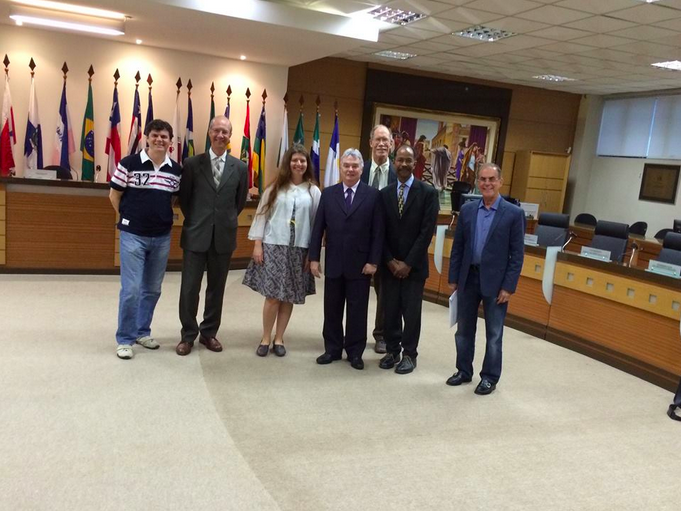 Here we are with some of the judges of this upper level court (any appeals go straight to the Supreme Court of Brasilia), standing in the great hall of the court. There are currently 26 judges, and in important matters of government they all sit in justice, deciding the case by a majority vote.

Our hosts, the Chief Judge of the court (4th from the right) and Judge Manuel Rabelo (1st on the right) sit in criminal and civil cases respectively. We got to see a criminal appeal. It was a burglary case; the appellant was charged with breaking into car windows and was caught in flagrante delicto (in the act), which is a fairly important consideration in Brazilian substantive law.


When the court hears an appeal, there are three judges present. The prosecutor sits with the judges and basically does nothing. The defense attorney stands across the room in street clothes and pleads her case (overall, in this system, the defense gets very little respect, and it's a job poorly regarded and poorly remunerated compared to those of prosecutors and judges). Only one judge of the three reads the case, and s/he renders an opinion. Based just on listening to the judge's opinion, the other judges decide whether they affirm or withdraw to read the case on their own. All of this debate takes place in open court; the judges do not discuss the case amongst themselves.
To become a judge, you have to pass a civil justice exam. Most appellate judges are first-instance judges who received a seniority or merit promotion, but a few come from the prosecutorial service. About half the judges in lower courts are women, but only two out of the 26 in the upper court are women. Each judge has several clerks and a couple of estagiers (externs) who help write the opinions.

-----------
Many thanks to Ricardo Gueiros and Marco Olsen who made our visit to the court happen.