On Monday morning, I drove to Sacramento and submitted this petition, calling on Gov. Brown and Attorney General Harris not to appeal the decision in Jones v. Chappell, in which Judge Carney of the U.S. District Court found the death penalty in California unconstitutional. It started as a small plea on Facebook, and without any pushing or prompting from me found its way to the Daily Kos and to the Daily Journal (twice). By the time I submitted the petition, it was 2,198 signatures strong. That's me on the left with the gubernatorial bear.

There are still 12 days left for the Attorney General to appeal the decision, and as I explained here, if her office does not do so, it doesn't mean the death penalty in California is effectively abolished, but it would be a great start of a series of legal and political moves that could spell its demise. I'm beginning to think that the death penalty can't be executed; rather, it has to die a slow death from a chronic disease (delays, costs, malfunctions)--much like the vast majority of the inmates on death row.

I think everyone understands this, even if they don't like it, and that includes death penalty proponents, who seem to be freaking out about the prospect of $130 million annually in savings and folks being put in general population serving life without parole (which they do anyway, just without the expenditure.) And it seems that death row supporters in California are beginning to freak out at the not-unlikely possibility that the Attorney General is going to leave this decision alone. First was this post on Crime and Consequences, inviting district attorneys to risk their jobs and eat up their lives by appealing a decision their boss might not appeal against her officer's discretion (really?). But then, the decision was actually appealed. Yesterday. Not by the Attorney General. By a guy named Robert Justice.

Don't believe it? Here's the notice of appeal. 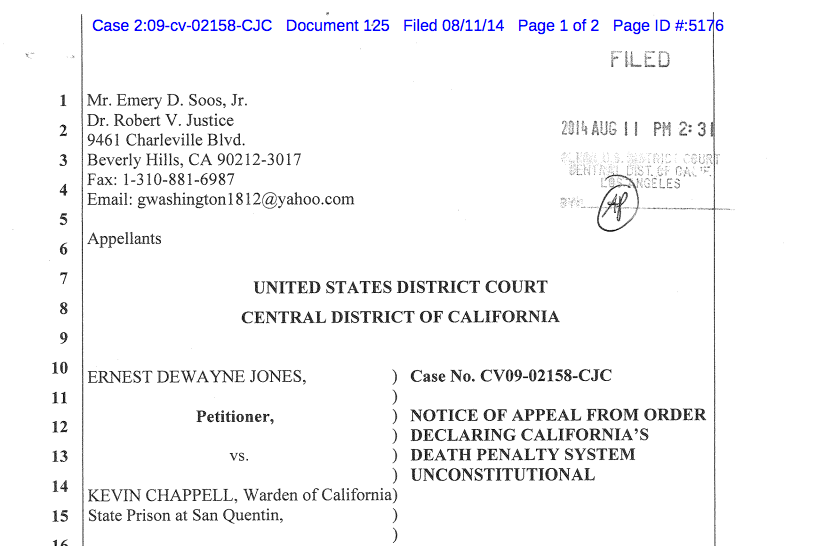 I bet you're wondering who these mysterious appellants are, and what gives them standing, given that they are not Jones OR Chappell OR the Attorney General. Well, the signatures on the petition give away their interest in seeing the death penalty continue its slow limp into the sunset. Mr. Soos and Mr. Justice are "citizens of the State of California".

First thing's first: this is obviously not going to work. Unless Mssrs. Soos and Justice have some truly acrobatic standing argument up their sleeve, the issue of standing in a case like this has already been decided by the Supreme Court. If the Attorney General does not support our 1978 voter initiative to reinstate the death penalty, citizens have no standing to do so in her stead, not even if they're the ones who fundraised and pushed the initiative in the first place. This is going to be thrown out of court for lack of standing faster than I can say "Hollingsworth v. Perry." 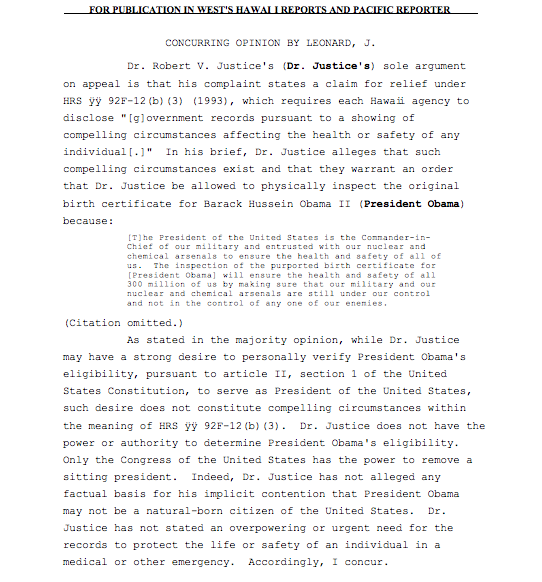 I will give Dr. Justice credit for his enthusiasm regarding the political and legal process. It's good to see citizens of California spend energy and resources on vital matters of public importance, such as his previous legal endeavor, which involved trying to get the State of Hawaii to reveal President Obama's birth certificate (yes, it's the same guy. He's a birther).

But let's get serious for a bit. I want to give Robert Justice the credit that he doesn't seriously think he has standing, and that this might be his attempt to persuade, or shame, our elected officials into doing his bidding. Anticipating some arguments from death penalty supporters, here goes:

The Attorney General has to do what the people want.

No. No, she doesn't. Not when the people's will goes against what's fair and just and makes sense. Remember Jack Conway, Attorney General of Kentucky? This is him, courageously saying that he is going to do the right thing and refrain from appealing a decision that same-sex marriage bans are unconstitutional "even if some disagree."


The people want the death penalty to remain.

What we know from the last election is that the percentage of people who want the law to remain is the lowest it's been in decades: 53 percent. And it will continue to go down, in the same way that support for same-sex marriage went up. The population is getting younger. And, as a French student reminded me this week, France abolished the death penalty before most of the public agreed with abolition.

The Attorney General should uphold the law.

Well, of course she does. But what counts as "law" is a changing, evolving thing. The death penalty was constitutional until 1972. That was "the law". Then it stopped being "the law", and became "the law" again in 1976. When Jack Conway declined to defend a bigoted, homophobic law, he expressed his opinion--that the court's decision was law now. Similarly, a decline to appeal Judge Carney's decision makes it "law", and opens the door to more changes and processes that may make abolition "law" in the entire state of California.

The Attorney General owes it to us to see this through, so we can have a Ninth Circuit decision up or down.

That's an interesting one, and I've heard it from several people I respect. But I think we all understand that litigation involves strategy. Appeals are discretionary for a reason, and it is a legitimate opportunity to employ strategy and shape the law of the future--whether by appealing or by refraining from appealing.

This is the end of the death penalty. Isn't it healthier if it comes about by means of extensive public debate?

First of all, this is not the end of the death penalty, for reasons I explain in detail here. There is still plenty to be done and plenty of room for extensive public debate to take place. But public debate about this has been going on for centuries, and many arguments have been made on the pro and con sides for the last forty years in particular. We've discussed deterrence, racial discrimination, innocence, botched executions, ad nauseam. In some ways, it's befitting that the death penalty perish in the same way that most of its subjects perish--namely, slowly, quietly, of natural causes, exhaustion and dysfunction.

________
Props to the anonymous kind soul who provided some of the sources for this post.
Posted by Hadar Aviram at 8:40 AM

As regards French public opinion, it's true that there was in 1981 a clear support of capital punishment, still it didn't seem to be a core issue for most voters, given that Mitterand won the presidency. He clearly stated during a famous Tv debate that he would repel the death penalty if he was elected. Interestingly, a survey in 1969 showed a majority opposed capital punishment . At that time, most would have thought that the guillotine would soon be a relic of the past.

Sadly, several high profile criminal cases later happened and it shocked the citizens into favoring death penalty again. Especially the Buffet/Bontemps case (an escape attempts by two inmates, that led to the deaths of one correctional officer and a female nurse). The particular context of the 70s (leftwing terrorism, scores of bank robberies, etc) also drove a high concern about crimes and a public support of "tough on crime" attitude. A famous TV anchor then said "La France a peur". Everybody recalls his words, eventhough the last part of his sentence has been forgotten despite its relevancy: fear is not a good advisor.


Presidents Pompidou and Giscard were known to be personnaly opposed to capital punishment, but they felt compelled not to use their presidential right to commute death sentences. That's why France has the dubious privilege of being the last western european country where an execution took place. Abolition of capital punishment is now considered a major achievement of Mitterand, nonetheless there's something curious with the man and not a well known fact: as a Justice Minister during the Algerian war, he actively carried out quite a number of death sentences against Algerian terrorists, many more than both Pompidou and Giscard. He never explained his personnal evolution toward abolitionism