The Dark Side of Gideon 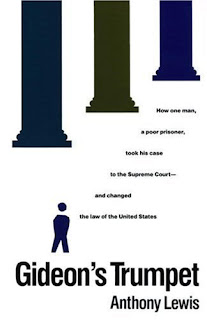 It is universally acknowledged that the 1960s were good years for criminal defendants. The Warren court, subscribing to a philosophy of constitutional incorporation, bright-line rules and prioritizing accuracy over efficiency, provided defendants with a series of constitutional rights which would be chipped at by the post-Warren courts for many years afterwards. The right of rights - a right as well as a tool to achieve other constitutional rights - was the right to counsel, affirmed in Gideon v. Wainwright, and later (in Argersinger v. Hamlin and in Scott v. Illinois) more narrowly defined as to include any situation of "actual imprisonment". Those of you seeking some of the story behind the monumental Gideon decision, will find it in Anthony Lewis' fantastic Gideon's Trumpet.
By making the decision applicable against the States, the Warren court did more than intervene in State systems of values; it intervened with their budget. It required the states to come up with good strategies to provide subsidized representation for indigent defendants. An important rationale behind this decision was the wish to generate more equality between defendants of different classes. One way of doing so was through creating Public Defender offices around the country, though not all states did so, and some chose to work with contracting and retainer systems.
The dark side of providing broad, free legal services has to do with the quality of service. Research in the 1960s and 1970s was not oblivious to this fact, and was notably skeptic about the quality of representation offered by public defenders to indigent clients. Abraham Blumberg compared such representation to "a confidence game", in which the public defender, in cahoots with other members of the "courtroom workgroup", "cons" the client into agreeing to plea bargains, thus making the system run more soothly and efficiently. The recently and sadly deceased David Sudnow, in a no-less classic and more systematic study, shows how defense attorneys assess the extent to which a specific case is a "normal crime", which can be "sold" as such to the prosecution for a preset tariff. Newer studies, such as Debra Emmelman's 1996 article and her subsequent book, Justice for the Poor, had a more positive and less cynical perspective on legal services to indigents; however, Emmelman points out to the lack of resources faced by lawyers in these situations.
And, indeed, with no resources, institutions that provide ample representation cannot guarantee quality representation. Just a few months ago, the New York Times reported on several Public Defender offices around the nation who had refused to take on new cases, being unable to properly and adequately handle the load they faced.
These budgetary problems have come to haunt the Bay Area as well. As reported in today's Chronicle, the San Francisco Public Defender, Jeff Adachi, is reporting a dire lack of resources, and arguing that if the office does not get two more paralegals, some cases will need to be referred to firms outside the office. This bothers me profoundly not only as someone who cares about the criminal justice system, but also as an educator who prepares public-interest-minded students for, among other vocations, careers in public defense. This year, scores of bright, talented, and hardworking students will graduate from top law schools, and many of those who seek public defender careers will find themselves working temporary hourly-paid jobs, or, worse, unpaid clerkships.
The system is not only bankrupt where prisons are concerned; it is bursting at the seams in other stages of the criminal process. Here's hoping that things get better sooner rather than later.
Posted by Hadar Aviram at 1:17 PM

I think part of the problem is that the people who are most affected by poor quality legal defense provided by overworked and under funded public defenders aren't members of society which people pay much attention to on their walk to work. These aren't the members of society which get the attention of the mainstream media, or our daily thoughts about our personal trials and tribulations about the morning commute.

Part of the problem, in my view, is that often corrective actions the legislature takes to remedy abuses and failures in the system is when there is a high profile case that demonstrates the major flaw in the system.

However, once a case becomes high profile, clients in sensational cases (even poor clients) often don't have a public defender representing them anymore, but a high-profile lawyer who may be willing to work pro bono in order to gain the publicity (or to do good... if I may suspend my cynicism for a moment).

The issue of inadequate resources among public defenders, therefore, does not seem to percolate to the top of societies problems... ever.

Any high profile crime case - be it Laci Peterson, OJ Simpson, or the occasional child who goes missing and gets randomly (or not so randomly) picked up as a "personal interest" story on CNN, is not going to be using a public defender.

So the question is, how do we sound the alarm about a problem that news outlets have no real "news peg" to begin a discussion about california's corrections crisis?

Moreover, because the correlation between the institutional problems of our justice system does not obviously show the "cause and effect" between the problem and the social consequence, people don't connect the two. Somehow, it needs to be distilled into sound bytes!

I agree, Steve; the "normal crimes" seldom attract the attention they deserve. I'm glad Jeff Adachi is sounding the alarm; it is extremely important. And, we hope to sound the alarm even louder come late March at the conference, when we hope to get together and discuss some of these serious issues.

Debby, that's an inquiry best addressed at CDCR; I hope you get satisfying answers. Does any of our readers want to weigh in?