Zen and the Art of Prison Maintenance

California’s prison health care imbroglio received a lot of press this week:  Gov. Schwarzenegger and AG Brown filed a motion before federal district judge Thelton Henderson, asking him to remove Clark Kelso, the receiver he appointed to oversee reform of the state’s troubled prison health care system, and return control to the state. The motion, likely directed at higher courts who may be more sympathetic than Henderson, is the latest in what is becoming an increasingly nasty political struggle between the state and Kelso. 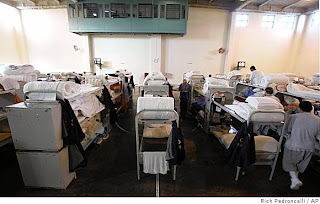 The debate between the two has focused recently on the ability of the state to manage the department of corrections (see Aaron’s post below about the receiver’s most recent tri-annual report), but has relegated the proposed reforms themselves to the sidelines.  Tucked near the end of articles are lines like the following:

LA Times: State officials estimate that the facilities would cost up to $2.3 billion a year to operate, and draft plans have included exercise rooms, music and art therapy areas, natural light and landscaping. "The environment should be 'holistic,'" Kelso's plan says.

SF Chronicle: An early draft of plans for new construction includes space for activities such as yoga and gymnasiums with basketball courts, among other amenities. [Kelso] said that his office did not propose the yoga space but that it was required under state mental health standards.

It’s easy to characterize any spending on inmates that isn’t strictly orange jumpsuits and cells as frivolous, especially in times of economic crisis when people are more averse than ever to seemingly unnecessary expenditure. But sentences like “the environment should be ‘holistic’” give the impression that we are spending $2.3 billion to turn our prisons into Zen gardens, and, perhaps more than the political posturing, do a disservice to our attempts at substantive debate about what the problems in the prisons actually are, and whether Kelso’s proposed reforms are the right way to address them.

Fantastic post, Melissa. I think any misinformation that people might have about the prisons, and any illusion that the additional budget would create "zen gardens", would be shattered within five minutes of reading at the Receiver's website. We should really stay tuned.

Many of the programs such as music and art therapy, and yoga and other forms of relaxation and physical well-being have been available for years in community hospitals and in state hospitals. These are nothing new and physically or mentally ill inmates have just as much right to these programs as do other citizens of the State of California. A basic fact of prison is that inmates are wards of the state. They are not free citizens. They have basic human rights guaranteed by the constitution, but since they cannot make their own medical appointments or even go to the drug store and purchase aspirin, it is incumbent on the state to provide necessary care. Given that, there are no such services currently available anywhere in the prison system, certainly new facilities are going to appear bright, shiny and overly fancy. But what is proposed by the receiver is the standard of care in the community. If non-incarcerated citizens don't have health insurance or adequate medical or mental health care, this is a fault of both state and federal government, and also needs reform as much as does health care and mental health care in the prisons. But at least you can still go to the store any time you want to get over the counter drugs and other forms of relief.