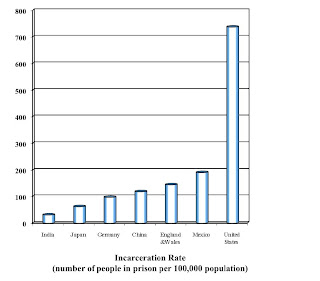 The State's correctional crisis is but one disappointing piece in a national mosaic of alarmingly growing incarceration rates. A recent more-or-less bipartisan attempt to solve this problem on the national level is Senator Webb's new National Criminal Justice Commission Bill, reported on TPM.

What does this consist of? Here's the full text of the bill. The initial remarks on the bill reiterate all the somber things we already know: booming incarceration rates, public punitiveness, the overrepresentation of minorities, number of parolees, high recidivism rates, high prevalence of gang activity, problems of addiction, and inmate mistreatment.

The bill proposes the creation of a National Criminal Justice Commission, who will provide evidence-based information on a non-exclusive list of issues, including comparative incarceration rates, prison administration around the US, prison costs, gang activity, drug policies, the treatment of the mentally ill, and the historical role of the military in preventing crime (?). The commission will make recommendations for reform in a report, which will be submitted 18 months from the date of the commission's appointment. The report will be available to the public. The 11-member commission will be bipartisan and will include members appointed by Republican and Democrat lawmakers and governors, with expertise in criminal justice and corrections.

While, in general, more information and less moral panics are something to strive for, several questions can be raised:
Stay tuned.
-------------
Props to Adam Maldonado for sending this my way.
Posted by Hadar Aviram at 8:17 AM

Email ThisBlogThis!Share to TwitterShare to FacebookShare to Pinterest
Labels: the big picture