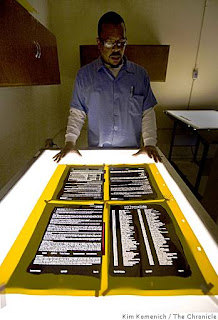 This Sunday's Chron reported on the inmate newspaper at San Quentin. According to the article, rather than being merely a mouthpiece for the administration, the paper holds itself to objective standards of reporting.

Witness the tough-minded piece that ran in the January issue about San Quentin's administrative segregation unit, "The Hole," where recalcitrant prisoners are disciplined by being locked up for most of the day in one-man cells. The News described the wing's dirty cells, ripped and shredded mattresses and generally appalling conditions.

Before the story was published, however, the News' senior volunteer adviser, retired Associated Press newsman John Eagan, told editor-in-chief Ken Brydon, serving a life term for murder, and managing editor Michael Harris, doing 28 years for attempted murder and drug crimes, that they had to get the other side.

They did, quoting prison Sgt. D. Kilmer to the effect that officers go through a checklist of a cell's condition, but that "the maintenance repair on lights could be better." The article was approved by Luna and ran in the newspaper, and the next issue carried a follow-up quoting prison officials at length.

(incidentally, the Pulse of San Quentin's report is timely and important; yesterday's New Yorker has a fascinating and disturbing piece on the effects of solitary confinement.)

Prison newspapers are not a new phenomenon. Some of you may find interest, for example, in this historical issue of The Prison Press from 1899. And there has been constant litigation regarding the right of inmates to participate in outside media, whether it be mainstream media or specialized projects like Prison Radio. For some of California's legacy of outspoken inmates, I strongly recommend Eric Cummins' excellent The Rise and Fall of California's Radical Prison Movement.