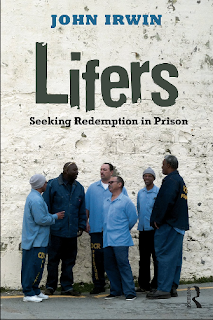 As you might imagine, we get a lot of emails from blog readers. Much of our recent correspondence involves family members of lifers--many of them third-strikers--who are anxious to know how the Plata/Coleman release order, or the Governor's plan to reduce prison population, might affect their relatives in prison. The answer, of course, is anyone's guess; but from the discussions before the court, it would appear that the releases would mostly apply to short-term non-violent drug offenders. Our sympathies, as a society, are often placed first with inmates from this category, rather than with those incarcerated for longer periods, especially for violent sentences. This is why John Irwin's last book, Lifers, makes for such an interesting read.
The world of criminology has recently lost an insightful and passionate thinker and reformer, with Irwin's passing ten days ago. Irwin's perspective on the correctional system was informed by his experiences as a juvenile delinquent, which led him to car thefts, burglaries, and finally an armed robbery, for which he served five years out of a five-to-life term. As he observes in Lifers, under today's sentencing regime he would probably have served a much longer term. While in prison, he started accumulating academic credits, pursuing a college degree. After his release, he continued his education, eventually earning a Ph.D. in sociology and becoming a pioneering voice in a field that later came to be known as "convict criminology". This perspective on crime and punishment comes from academics who are, themselves, former convicts, and has much in common with the critical criminology that emerged in the 1970s.
One of the major strengths of convict criminology is the ability to communicate on a more personal way with inmates and their experiences. While, as James Bennett shows in his fascinating book, oral histories of delinquents and convicts have been an important component of criminological research for decades, these methods are not without their problems, particularly with regard to interviews with inmates (as Mary Bosworth explains in this fabulous piece). Researchers like Irwin have a remarkable ability to connect with the experiences and inner lives of their interviewees, and Lifers is a wonderful example.
The book is built around in-depth interviews with seventeen San Quentin inmates sentenced to life, a substantial number of whom are still in prison awaiting their parole dates. Irwin presents their personal stories in their own words, starting with their family background, providing an honest, unflinching description of their crimes (homicides for the most part), and telling of their time in prison and the transformations they have undergone during this lengthy period of confinement and reflection. The narrative is occasionally paused by Irwin, who draws general insights from the commonalities between the individual stories, but is careful to retain the individuality and uniqueness of the narrators. The reader comes to care about these people and follow their personal journeys with sympathy and interest.
Irwin's conclusion, which he explicitly repeats throughout the book, is clear: the men he interviewed are very different from the men who had been sentenced to life in prison so many years ago. This transformation undermines any argument for lengthy sentences; the brash young people who had committed these crimes have been, for a long time, thoughtful, remorseful, transformed individuals. Yet, some interviewees' parole has been repeatedly denied for retributive reasons (see this, for example).
The book makes a good read for folks who know little about the criminal justice system. It humanizes the inmates for people who may not have had a lot of contact with incarcerated people. It also provides a good historical primer of the process that led California governors to ratchet up our sentencing structure, emphasizing in particular the increase in actual time served for lifers. The informative background provides some illuminating tables of comparison between California penal code provisions in different points in time, as well as some broad information about the extent to which different governors (Pete Wilson, Gray Davis, and Arnold Schwarzenegger) have been willing (or unwilling) to pardon lifers. It also makes for a short and engaging read, suitable for the general audience at least as much as for professionals in the correctional field.
Posted by Hadar Aviram at 1:40 PM

Also, check out this report, coauthored by Irwin (and many other colleagues), titled Unlocking America.