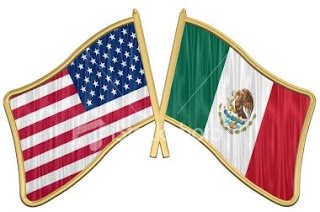 The latest Governor's proposal to save on corrrections by building correctional facilities in Mexico to house undocumented immigrant inmates has raised eyebrows around the state and yielded various responses, ranging from support to downright mockery. Since I'm not an expert in international law, I consulted some colleagues about the legal implications of putting the proposal into practice.
Can US build prisons in Mexico? The answer to this question depends, of course, on Mexico's consent. The interdependence between the countries, particularly with respect to labor (read all about it in Eric Schlosser's Reefer Madness), often makes us forget the Mexico is a sovereign nation. Mexico might, however, agree to such an arrangement, either for profit, or in order to ensure that its citizens are properly treated. Given what we know about corrections in Mexico, the latter would not be a concern. The former raises serious questions about the potential savings for the U.S. from such a solution.
In addition, much as some California secession advocates would like to believe it, California is not a sovereign nation, which presents additional difficulties.
Even if these difficulties were to be overcome, there would still be serious jurisdictional problems involving various legal issues about the new prisons. Which legal system would govern inmates' rights in Mexico? International law, in itself, provides very little in the way of inmate rights, though some of its minimal provisions may be applicable in a system that employs torture. We are left with two more realistic possibilities: Mexican law or U.S law.
Can California subject its inmates to Mexican law? For inmates who are not Mexican citizens, it is highly questionable whether Mexican law can be imposed on them against their will. Granted, tourists in Mexico are subject to local law, but being involuntarily housed in a foreign country is not an equivalent solution. If the inmates are Mexican citizens, this is easier to resolve, particularly if the intent is to use the new prisons to house people who have been in the U.S. in violation of immigration law. However, not all undocumented immigrants are Mexican, and the current mix-ups at CDCR about people's status do not bode well for a classification system that would clearly resolve sticky issues of jurisdiction.
What about applying U.S. law? This situation would be, of course, preferable from the inmates' perspective, because that would allow them to raise constitutional claim and rely on 8th Amendment jurisprudence. The ability to apply U.S. law to prisons in Mexico is not without problems, but is not unheard of. After all, foreign embassies apply the laws of their home countries, and some institutions have been analogized to embassies for jurisdictional purposes. In a fascinating paper, titled Rights Beyond Borders, my colleague Chimène Keitner discusses the complicated and tricky issues involved in applying the U.S. Constitution to defend detainees against torture (say, in the Guantanamo context). There are important differences between the two situations, of course. Moreover, assuming that prison building will be done with private contractors, issues of conflict of laws arise with regard to possible tort litigation.
In the very least, it is safe to say that there are plenty of issues and problems that would need to be resolved before we resort to building prisons on foreign soil. On the ethical side, it would probably be preferable to remember our responsibility to contain and resolve a problem created within our borders.
---------
Many thanks to my colleagues Chimène Keitner and Naomi Roht-Arriaza for helping me think this through.
Posted by Hadar Aviram at 1:09 PM