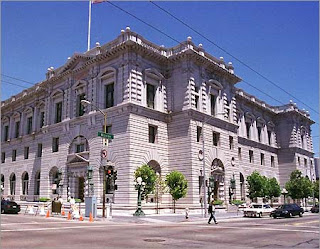 The 9th Circuit heard today oral arguments in Valdivia v. Schwarzenegger. I went to hear Geoffrey Holtz and Ernest Galvan argue for the petitioners; they presented arguments in two matters relating to parole revocation hearings.
The first issue, which is less interesting for our purposes, has to do with the admissibility of hearsay evidence in parole revocation hearings, in light of new caselaw regarding confrontation rights (I'll probably inflict that on my Criminal Procedure students this semester. Have a good semester, folks!). The second issue, on which I'll expand, has to do with Judge Karlton's decision to set aside parts of the state statute enacted as part of Prop 9 due to the content a federal consent decree.
Background: the federal consent decree in Valdivia was finally reached after a decade of litigation, aimed at clearing up the procedures for parole revocation and crafting them so they would comply with minimal constitutional due process requirements. The decree mandated appointing state counsel for all parolees in danger of revocation, and required proceedings for proper notification and discovery to the defense; created procedures to speed up hearings so people would not be held in unnecessarily before their status was determined; and ordered to simplify forms and documents so that the parolees could understand them. A special master was appointed to work with plaintiffs and defendants to ensure compliance with the decree, and gradual progress was made.
Prop 9 (which the State Attorney repeatedly referred to during the hearing as Marsy's Law) threw this situation into chaos. While some of its provisions did apply, as advertised, to victims' rights, other provisions made changes to parole revocation procedures, most importantly by denying counsel to a large portion of parolees.
The elephant in the room, during the oral arguments, was the actual constitutionality of the new provisions enacted in Prop 9, and whether they really fell beneath the minimal due process owed to parolees; in fact, if I'm not mistaken, it appeared that the state conceded that some of these provisions might raise constitutional issues. Instead, the discussion focused on the legal question of whether Judge Karlton's decision to set aside the Prop 9 provisions was correct. As the parolees' representatives argued, this was a classic supremacy clause situation; a federal consent decree trumps state law. The state, according to Mr. Holtz, was under a burden to prove that circumstances have changed to an extent that required modifying the consent decree. All the state did, argued Mr. Holtz, was point to the existence of a new state law; they did not seize the opportunity to actually argue that this new state law has implications that require modifying a federal decree. Under the circumstances, introducing a chaotic element into a recently-modified process, which serves to funnel 10,000 cases a month through the correctional system (yes, you read it correctly) was an irresponsible thing to do, and the state had to provide a viable alternative if it wanted to change the elements of the decree.
Much of the back-and-forth between the judges and the parties had to do with the extent to which Prop 9 turned back the clock to the unconstitutional proceedings prior to the consent decree. The answer to this question seems to be, according to both parties, somewhat complicated. Some Prop 9 provisions are, indeed, a return to the pre-decree times, while others are actually better for parolees than the consent decree guaranteed (such as provisions for a preliminary hearing). The state attorney, Ms. Johnson, argued therefore that a flat-out dismissal of this provisions was problematic. Mr. Holtz pointed out, in reply, that the state should have done a better job at providing an alternative process, which complied with Prop 9, and satisfied the constitutional requirements (there would naturally be some debate about the features of such a process, but at least it would be more than merely informing Judge Karlton of the existence of the new statute and expecting him to bend the federal decree to accommodate this development).
Judge Smith seemed interested in examining the possibility of remanding the case for examination at the District Court. Mr. Holtz pointed out that such a remedy was possible, but unnecessary; the state could return to Judge Karlton at any time with a proposal for a Prop 9-compatible revocation hearing process.
We'll report on the outcome of this case as it comes out.
Posted by Hadar Aviram at 4:24 PM