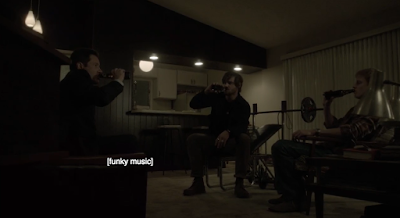 These are Hodiak, Shafe, and Walt (Hodiak's son) sharing a beer in friendship, and toating to America, even though their fragmented and flawed understandings of what America has become pull them apart.

Hodiak, the WW2 cynic veteran, is just trying to do his job. Shafe, an early Vietnam veteran, is "not there yet" with respect to the anti-war movement. An Walt, about to be court-martialed for revealing what he knew, is embracing the movement and feels disenchanted with his country.

Disenchantment abounds in Episode 12. The murderers of the gay victims and the judge's wife are caught and killed--one by the cops and one by his brother's hand--and the cover-up of the deaths is truly masterful--the Thin Blue Line strikes again.

Oh, and apparently Mary gives birth to a dead son, and somehow Sadie procures a live one for her to replace him, partly to curry favors with Charlie - another incident that has no bearing on the real chronicles of the Manson family. I liked the aesthetics of juxtaposing the christening with Hodiak's award of the Medal of Valor, but I'm not sure what was implied. Nor did I particularly appreciate the Ken Karn backstory which, again, tries to make something that in reality was plenty horrible without embellishment into something else.

This concludes our series on Aquarius, and we return to our regular blogging program.
Posted by Hadar Aviram at 6:29 PM