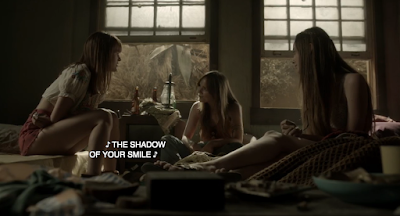 The second episode of Aquarius features quite a bit of gender critique, ranging from internalized, closeted homophobia, through sexual hypocrisy and workplace discrimination, to domestic violence.

In is search for his daughter, Ken finds his former client and lover, Charlie, who subjects him to his spiritual and sexual ministrations once again. One almost feels sorry for Ken; his internalized homophobia and self-hatred make him an ideal victim for Manson's exploitation. Meanwhile, affairs abound: Ken's wife and Hodiak, a former couple, succumb to their passions, while Hodiak's wife sleeps with Cut, his former partner. Not a single marriage in the series is portrayed as happy and fulfilling. The show makes it almost refreshing to listen to Sadie (Atkins), Katie (Krenwinkel) and Emma discuss the need to end jealousy; it would be idyllic, if not for the fact that Manson employs the control tactics of a common pimp and essentially sells out the girls to his sound engineer and to others. In this episode we see him, for the first time, battering the girls themselves into submission.

To infiltrate a cult in which sex is a common currency, the undercover police officer, Charmain, has to sacrifice, more than Shafe, who works with her, is comfortable allowing her; but as second wave feminism is only just beginning, and Charmain is in a hierarchical organization, she is willing to go undercover among predatory and dangerous bikers, and sometimes has to respond quite sharply to male officers who miss no opportunity to humiliate and objectify her.

This episode has piqued my curiosity about undercover police practices in the 1960s, and the extent to which these were employed to infiltrate cults. These are, after all, the early days of the Nixon administration, and police professionalism and proactive policing would be encouraged. Perhaps there are many unsung heroes and villains still among us, who saw people their own age as the enemy and can tell many tales of duplicity and domestic espionage.
Posted by Hadar Aviram at 9:45 PM