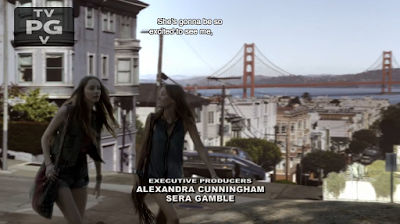 Mary Bronner, pregnant in San Francisco, seems to have wizened to Manson's manipulations; she is pregnant with his child, but is hesitant to join the family in Southern California. Manson had beaten her, and she seems to resent the fact that "Charlie's girls just get prettier". Nonetheless, the family is in need of her money, partly to purchase guns, and so the girls come to San Francisco to retrieve her.

But, as usual, the interesting part of the series is not about the Manson family, but about the police department. Hodiak is investigating the murder of Hollywood actor Raymond Novo, staged as a crucifixion; a valuable ring is missing from the victim's possessions. Soon, Novo's homosexuality and his secret dalliances with men at the film studios come to light, and Hodiak needs to investigate at a gay bar.

The Stonewall riots have not happened yet, but other important riots for gay rights have already occurred in San Francisco and in Los Angeles. The radical Gay Liberation movement and its legal struggles are yet to be born, but the community is no stranger to activism. Fresh in the mind of bar owners and patrons are the massive police raids of gay bars in the 1950s, so well captured in Katie Gilmartin's Lambda-winning noir novel Blackmail, My Love. So much so, in fact, that the bar owner recognizes undercover Hodiak as a cop who got all patrons arrested fifteen years earlier.

Hodiak tries to enlist Shafe to help with covert investigations, but apparently Shafe's openmindedness about feminism and interracial marriage stops at homosexuality, and he expresses views common at the time, referring to the men at the bar as "deviant" and "sick" and recoiling with disgust from one of the bar patrons. Hodiak surprises with an anachronism: "What do you care what they do with each other?" In other news, the Captain is back, but much as Charmain Tully hopes for an opportunity to do real police work, she is summarily pushed back into her file-cabinet folder, dismissed and humiliated.

In the end, the investigation is shut down under pressure from the film studios, and the bar is closed; more frighteningly, the patron who befriended Shafe goes home with a man wearing Novo's ring. A reminder to the viewers that in the gay community at the time, just as in the black community from Episode 4, overenforcement and underenforcement go hand in hand in marginalizing and destroying disenfranchised groups.
Posted by Hadar Aviram at 8:00 PM