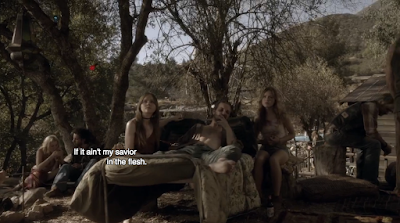 As Brian Shafe establishes rapport with Manson and his crew and battles racism at home, Sam Hodiak and Charmain Tully are investigating a domestic violence incident by a football pro against his girlfriend.

While I don't doubt that domestic violence was at least as common in the sixties as it is now, the choice to set the incident in the football world is surely a nod to contemporary events. Charmain interviews the girlfriend, who reports violence from an anonymous man. Charmain realizes that the information does not add up, nor does it explain why some of the bruises don't look fresh. An escalation in the violence puts the girlfriend in a coma and the perpetrator free to sign autographs and joke with his adoring fans. Charmain hopes to catch him in the act and goes undercover: "I want it to mean something." But Hodiak, ever the cynic, advises her to focus on battles she can win. This is one battle I'm not sure we've won yet.

As is Brian and Kristin Shafe's battle against their racist landlord and neighbors. It turns out that the racist campaign against them  supports their landlord's financial interests; he hopes the white neighbors will flee the neighborhood so he can exploit black newcomers. But, at least this time, his ploy is uncovered, and Hodiak becomes a closer friend of the Shafe family as a result.

After five episodes I can already say that, whenever a Manson appearance darkens my screen, I'm less and less clear on what the series creators make of him. This episode sees him enthusiastic about the procurement of new guns and, ever the two-bit pimp, ordering his girls to thank his providers with sexual favors. One of them seems reluctant, which Shafe (undercover) picks on; two reluctant Family members like that were part of the downfall of the real Manson family. But toward the end, Manson, healing from his wounds, shares a bit of personal history--his mother's abandonment--with Katie. "I learned there and then", he says, "that it's better to be the thing people are afraid of than to be afraid." This seems to be a message of hard-wired positivism, which is something I hear a lot when discussing my book project with friends. And yet, people with childhoods at least as horrific as Manson's don't end up committing terrifying crimes. The series seems to be trying to avoid classifying Manson as 'bad' or 'mad'. Which would probably work much better if it were dealing with a fictional villain, akin to David Simon's Avon Barksdale, Stringer Bell, and Marlo Stanfield, and not with a historical figure whose name invariably evokes ultimate evil in the minds of the viewers.
Posted by Hadar Aviram at 6:56 PM