Risks and Ethics of Criminal Justice Ethnography: The Case of Alice Goffman's On the Run 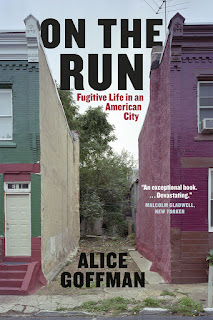 Alice Goffman's Life on the Run, based on her  dissertation work, is an ethnography of gang life in Philadelphia. Here's a chapter from the book. It has received plenty of praise, and some critique (though I found the critique fairly weak), but now it raises an interesting issue: If an ethnographer tags along her subjects, who are incensed by a friend's death and on the move to avenge it, is she part of a conspiracy to murder? In her methodological appendix, Goffman presents a narrative that many of us ethnographers refer to as "going native":

During the period surrounding Chuck’s death, I started studying shootouts in earnest: how and when they happened and what the ongoing conflicts looked like over time. But I don’t believe that I got into the car with Mike because I wanted to learn firsthand about violence, or even because I wanted to prove myself loyal or brave. I got into the car because, like Mike and Reggie, I wanted Chuck’s killer to die.

Goffman was criticized for, essentially, collaborating on a criminal enterprise, and her later explanation, in response to the critique, differs somewhat from that provided in the book:

One night, when Mike could not find anybody else to go with him, I agreed to drive. I felt ambivalent, but I went because I knew these drives were about expressing anger and about grieving, not about doing actual violence. I had talked Mike down from violence in the past, as did many other women in his and his friends’ lives.

I have just read Eugene Volokh's interesting commentary on Volokh's commentary includes views from several folks about this, among them Jack Katz:

As a citizen, as well as in my career as a sociologist, I’m concerned about interventions in this discussion that might embrace the flexibility of “conspiracy” and aiding and abetting laws to shut down descriptions of social life that many readers will take as resources for criticizing the government. Personally, I realize that it has not been since the Chicago 8 (then Chicago 7) that the use of conspiracy laws to shut down dissent or critical expression was something I had to think about in this country. (But maybe I have been asleep for 40 or so years.) I realize as well that labeling yourself a sociologist, like labeling yourself a journalist, gets you no privileges, but when conspiracy laws alone are the only formula available for prosecution, the abuse potential should remain the first and central concern.
As someone who, in order to inform policy and advance sociological knowledge, promotes close-up descriptions of social life through immersion fieldwork, I’m concerned about the potential of this controversy to quash the whole field of participant observation research in areas of social life that the government considers rife with criminality. In the history of academic sociology, ethnographic immersion in social life on “the other side” has been an important contributor to political culture in the US, going back to studies of gangs and “vice” institutions in the 1920s, through Becker’s and others’ studies of “deviance” in the 1950s and 1960s… I see Alice in that tradition and fear that academic sociologists, the great majority of whom work at a much safer distance from the people they write about, who indeed spend virtually all of their research life within the halls of academe, will become very wary of fieldwork that takes the researcher intimately into social worlds that are rife with what the government considers crime.

What do you think?
Posted by Hadar Aviram at 6:14 AM