Assembly Bill 327, introduced by Assembly Member Davis, passed in the assembly today. The new bill, whose text can be found here in full, would activate the "third strike" life imprisonment provision only if the third felony is for a serious or violent felony.

What counts as "serious or violent" felony is defined in section 667.5 of the existing penal code. The category includes serious offenses like murder, attempted murder, rape and kidnapping, but also first degree burglary, extortion and the like. It would seem to exclude some of the more scandalous examples of three strikes practices, in which the third offense would be petty theft of some sort.

The bill now moves to the senate floor. But getting too excited about this may be premature; the bill explicitly specifies that it only comes into effect if approved by voters in the 2014 election.
Posted by Hadar Aviram at 3:46 PM 6 comments:

Posted by Hadar Aviram at 10:20 AM No comments:

Today, Judge Thelton Henderson of the U.S. District Court expressed satisfaction with the improvements to prison health care, and ordered the federal Receiver, Clark Kelso, to report by april 30th when the receivership should end and whether the prison health care system will remain under federal oversight.

The Associated Press and the San Francisco Chronicle report:

The ruling marks an important milestone in a process that began nearly six years ago when the judge appointed a receiver to run California's prison medical system after finding that an average of one inmate a week was dying of neglect or malpractice. He cited inmate overcrowding as the leading cause, but said in Tuesday's order that conditions have improved.


He praised the better conditions throughout the system, particularly noted during inspections of medical facilities by the prison system's independent inspector general.


"Significant progress has been made," Henderson wrote, citing the receiver's own report to the federal court last week. "While some critical work remains outstanding — most notably on construction issues — it is clear that many of the goals of the Receivership have been accomplished."

While the Prison Law Office expressed concern that the Receivership's end is premature, it might be a wise thing to start preparing for the shift in health care with the realignment. Counties will have to incur some of the costs for inmates' health. But it's worthwhile to remember that serious offenders, who usually serve more time, will remain in state prisons, and their lengthy prison sentences also implies that they age in prison and thus require expensive care. 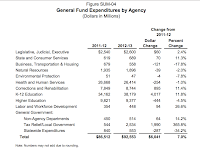 What's also interesting is the distribution of funds within the counties. The full budget for state and community corrections can be found here in PDF format.  It seems to still be in somewhat amorphous form, which makes sense given that each county will probably have some freedom in crafting its own budget.
We will continue to follow up on the realignment and on the expenditures of these funds in the future.
Posted by Hadar Aviram at 8:44 AM 2 comments:

And what a year it will be!

The Criminal Justice Realignment will figure prominently in our posts this year, with a special focus on the recent news regarding cuts that may endanger many juvenile programs. The most serious concern stemming from the cuts is that juveniles will be tried as adults. Some thoughts on the proper direction to take from Selena Teji and Emily Luhrs are posted here.

We're also excited about the prospect of SAFE California's initiative to end the death penalty in California in 2012, as well as a possible amendment of the Three Strikes Law to include only violent felonies.

Thank you, as always, for your readership, and stay with us by reading, commenting, and emailing.
Posted by Hadar Aviram at 10:59 AM No comments: