Thank You for Supporting Homeboy Industries! 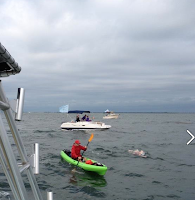 I just donated the full amount raised by my marathon swim in Tampa Bay this weekend to Homeboy Industries in Los Angeles. Thank you to all those who contributed!

It was an exciting day in Tampa Bay and conditions were fierce! If you'd like more information about how the swim went, read the update on the fundraiser page.
Posted by Hadar Aviram at 5:30 PM 1 comment:

Email ThisBlogThis!Share to TwitterShare to FacebookShare to Pinterest
Labels: do something, events

Today in the Senate: Abolishing Solitary for Juveniles?

SB 61, proposed by Leland Yee and scheduled to be voted on today in the Senate, aims at abolishing solitary confinement for juvenile inmates, except for periods not exceeding 24 hours in severe cases and for therapeutic assessment purposes. Let's all hope it will pass!
Posted by Hadar Aviram at 12:01 PM No comments:

A decision came out yesterday from the three-judge-panel that issued the original Plata v. Schwarzenegger decision: The state must comply with the original order. Moreover, should it not do so, it will be held in contempt. The L.A. Times reports:

In a blistering 71-page ruling, the jurists rejected Brown's bid to end restrictions they imposed on crowding in the lockups. The state cannot maintain inmate numbers that violate orders intended to eliminate dangerous conditions behind bars, they said.

Brown and other officials "will not be allowed to continue to violate the requirements of the Constitution of the United States," the judges wrote.

"At no point over the past several months have defendants indicated any willingness to comply, or made any attempt to comply, with the orders of this court," they said. "In fact, they have blatantly defied them."

The judges gave the state 21 days to submit a plan for meeting the population target by the end of the year. Administration officials said they would appeal the decision to the U.S. Supreme Court.

The piece pretty much speaks for itself, but I do want to say something about this to readers wondering why the state hasn't been held in contempt so far, which is a question I get asked a lot when I talk about this. I think it's important to understand that, while federal courts--rather than state administrators--have pretty much been the go-to place for inmate rights suits, courts are not natural policy designers. The judicial system is built on the premise of case-by-case arbitration, with an outcome that "takes sides" in a dispute between two parties (Martin Shapiro calls this "the logic of the triad"). Their ability to generalize and supervise is limited. The ways they perceive the world, discursively, are limited to assessing whether state agencies behaved in a way that violated constitutional standards - yes or no. Orders, supervision, revisiting issues--courts do all of those, but they do them because they have to. The hard work has to be done primarily by the state. Which is why, whenever possible, having a consent decree is a priority, and if that is impossible, it is at least useful to get some cooperation from the state and refrain from steps that will escalate the animosity between the state and the courts.

The escalation here--actually threatening the Governor with contempt--is understandable if one considers what Jerry has done in the last few weeks. He has attacked the special masters and receiver, and even griped about attorney's fees for the inmates' advocates. When seen in the context of this public relations crusade to besmirch the other side and the court-ordered mechanism, a threat of contempt is a logical response. And of course, the state retaliates by threatening an appeal to the Supreme Court. This is a collision course that will not end well, and it would behoove the Governor, and the state representatives, to consider growing up and collaborating with the courts. As things stand now, everyone has plenty to lose.
Posted by Hadar Aviram at 9:35 AM No comments:

The effectiveness of using police officers in schools to deter crime or the remote threat of armed intruders is unclear. The new N.R.A. report cites the example of a Mississippi assistant principal who in 1997 got a gun from his truck and disarmed a student who had killed two classmates, and another in California in which a school resource officer in 2001 wounded and arrested a student who had opened fire with a shotgun.

Yet the most striking impact of school police officers so far, critics say, has been a surge in arrests or misdemeanor charges for essentially nonviolent behavior — including scuffles, truancy and cursing at teachers — that sends children into the criminal courts.

“There is no evidence that placing officers in the schools improves safety,” said Denise C. Gottfredson, a criminologist at the University of Maryland who is an expert in school violence. “And it increases the number of minor behavior problems that are referred to the police, pushing kids into the criminal system.”

Of course, all of this echoes Jonathan Simon's Governing Through Crime, in which he talks about the increasing management of education as an enterprise of crime control. But it also echoes recently deceased Stanley Cohen's Visions of Social Control, where he spoke of "widening the net."

The accompanying slideshow tells the story as only photos can.
Posted by Hadar Aviram at 9:07 AM No comments:

Email ThisBlogThis!Share to TwitterShare to FacebookShare to Pinterest
Labels: criminalization, the big picture

We've been remiss in reporting the major development in the Coleman case - the counterpart to Plata that addressed the deficiencies in the mental health system. To Governor Brown's dismay, Judge Lawrence Karlton has decided that the mental health system has not improved nearly enough to end the special master supervision. The L.A. Times reports:

Karlton found that "ongoing constitutional violations remain," including failure to act on suicide-prevention methods recommended by the court's special master and one of the state's own experts. What gains California has made in reducing waiting lists for seriously ill inmates to receive psychiatric care "are new, and work remains," he said.

The judge found climbing suicide rates, shortages of mental health crisis beds and mental health workers, in addition to inadequate treatment space, despite years of planning, amounting to what he termed "deliberate indifference."

Court records show that Brown's surprise Jan. 7 motion to end federal oversight had been in the works since at least late 2011. The motion triggered a 90-day deadline for a ruling, leaving inmate lawyers roughly 10 weeks to hire experts, tour prisons and build their opposing case and giving Karlton a matter of days to weigh thousands of pages of contradictory depositions.

We saw some of the images captured by the parties during Michael Bien's talk at our recent conference.  The use of cages for everything, including group therapy, and the horrific condition of cells for people on suicide watch, stood out for me.
Posted by Hadar Aviram at 6:09 AM No comments:

The fantastic website Life of the Law includes an insightful piece by Nancy Mullane about her visit to Death Row.

“It’s all politics,” [death row inmate] Helzer says flat out [to Mullane], like this isn’t he first time he’s thought about it and now he has come to a conclusion, “Oh Death Row, tough on crime. It’s not a deterrent. The Death Penalty is not a deterrent. I’ll tell you why. One, is when people do commit crimes, they are not thinking, ‘Oh my gosh, I might get the death penalty, I better not do this.’ They’re in the moment. They want what they want. They have short-sighted. They don’t forsee the consequences of their actions because they’re impulsive. They do whatever they do, whatever crime it is. Now thinking about the ramifications. So that the notion that the death penalty is somehow a deterrent is a false premise.”
Posted by Hadar Aviram at 6:04 AM No comments: