Film Review: Once Upon a Time in. . . Hollywood 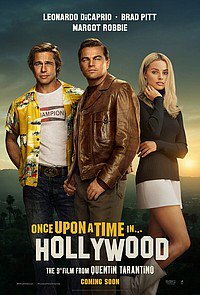 I just came out of a screening of Quentin Tarantino's new movie Once Upon a Time in. . . Hollywood, which I somewhat dreaded watching as an expert on the cases. My own forthcoming book about the Manson family, Yesterday's Monsters: The Manson Family Cases and the Illusion of Parole, has made me somewhat leery of Mansonsploitation, of which there is plenty as far as the eye can see. Because of the tendency to turn the tragedy of the murders (and the tragedy of five decades of incarceration that followed) into a spectacle, I decided early on I don't want to make a cent off of the book - all royalties are going to an organization that provides parole representation for indigent lifers - and commercial enterprises centered on the story of the murders give me the creeps.

But Tarantino's movie is not a spectacular recreation of the murders; in fact, it is a wise, almost lyrical, reflection on their cultural legacy. The main protagonists of his story, actor Rick Dalton and his stuntman Cliff Booth, live a reality adjacent to that of Polanski and Tate, Dalton's next-door neighbors We see both men confronted with turning points in their professional lives: aging out of acting, aging out of stunts, the importance of career, what does excelling in one's trade/art mean, big questions for thoughtful and flawed people. DiCaprio and Pitt are at the top of their game, both painting human, sympathetic, charismatic characters, and the movie is full of poignant, moving, and important glimpses into their inner worlds without becoming heavyhanded. The gentleness and nuance with which the two act their roles, and with which Tarantino paints their inner feelings, stands in contrast to the Spaghetti Western world that Tarantino has picked as a foil for the story. Truly a masterpiece.

But I watched the movie not just as a movie, but as an American phenomenon - a commentary on events that changed the course of American history, politics, and criminal justice. The movie is set around two axes of real history: the weekend in February in which Manson stops by the Polanski/Tate residence looking for Terry Melcher (the previous occupant) and the infamous weekend in August. Because we all know what happened in real life, a sense of malaise and foreboding accompanies our glimpses of Sharon Tate, wonderfully portrayed by Margot Robbie, as she lives out a hopeful, sunny existence expecting her child.

Much has been made of Robbie's few speaking lines; I don't see her role as diminished because she is not fully fleshed out as a character. Rather, her portrayal looks at her as the symbol she would come to embody - the quintessential California victim: a beautiful, famous, white woman about to give birth to a beautiful, famous, white child. Her joie-de-vivre around town--buying a book for her husband, watching herself on film and enjoying the joy she inspires in her fellow moviegoers, her delight in her friends--is palpable. Even Steve McQueen's commentary about her and Sebring--their enduring friendship after their breakup--does not taint her wholesomeness. We watch and dread, because we know the only thing that can kill pure, untainted good is pure, uncompromising evil. And we brace ourselves.

In Yesterday's Monsters I go into the way the narrative of the murders has shaped the California correctional landscape: because the crimes came to be seen as sui generis evil, they were the catalyst for the return of the death penalty; for the creation of life without parole; and for the dramatic changes in parole proceedings, including the gubernatorial veto right. In doing so, California fashioned what I call in the book the "extreme punishment trifecta" - its three most extreme punishments have come to be virtually indistinguishable from each other, creating a regime of interminable incarceration.

The reason these crimes were so instrumental as a rhetorical device in these developments is that the narrative around them was largely shaped by Vincent Bugliosi in his classic book Helter Skelter. As many of Bugliosi's readers will attest, the book very intently and aggressively promotes a narrative of the crimes as bizarre and apocalyptic, focusing on Manson's indoctrination of his followers into believing in a race war and helping jump-start it. While this story is not wrong, it is a truth that obscures other truths. The Manson family was a cult, though it was not understood as such until the mid-1970s, when our awareness of brainwashing and cults arose in the context of similar groups. And as a cult, it exploited--physically, psychologically, and sexually--its members, most of them adolescent girls. The crime also had the markings of an "ordinary criminals" crime, with a drug-deal-gone-wrong background (the narrative that Jeff Guinn exposes in his excellent Manson biography). For legal reasons, Bugliosi had to highlight the bizarre and obscure the ordinary. It's quite possible that a similar crime tried today, through the prism of #metoo sensibilities, would see the girls as victims, not as perpetrators.

What is unique about Tarantino's portrayal of the Manson family is that he manages to pack into the movie complexity and ambiguity. Manson appears in a brief scene in the middle of the movie, and is unremarkable, almost pathetic. We meet the rest of the family through the eyes of Cliff, the stuntman, who gives one of the girls a ride to Spahn Ranch. There, he encounters a scene that is at once pathetic and menacing. That not all is well at the ranch is obvious to Cliff, and he proceeds to check whether his old friend from his moviemaking days, George Spahn, is well. He is not entirely convinced that is the case, and has some disturbing run-ins with the scrawny, suspicious teenagers around him. The only violent incident happens with "Clem" (Steve Grogan), who is portrayed as small change. Tex Watson is portrayed as menacing and dangerous, but strikes out with Cliff. And throughout the whole scene, Tarantino creates a wonderful sense of duality between the young hippies' quasi-military readiness and guardedness against the stranger and the obvious squalor in which they live. You are left with the feeling that Tarantino, as opposed to Bugliosi, knows that you are an adult, and let's you form your own mind about these people and the danger they portend.

Even the eventual depiction of the disturbing night packs some surprises. It's hard to fully describe them without ruining some classic Tarantino moments, which I might get to at a later time, after many more of you will have seen the film. But I will mention that, even in the most threatening and scary moments leading up to the home invasion, there are moments of "ordinary criminals", moments of "cult", and moments of "Helter Skelter", though the latter are subdued and barely hinted at. Again, the viewers are treated with respect, left with autonomy to form their own impressions of the group, and free to comprehend the murders through the eyes of complex, adult fictional characters. Laudable choices all around.

Finally, Tarantino and the entire crew is to be congratulated for making a movie that creates a perfect sense of time and place. The songs, the design, the cars, the atomsphere, are so alive around the characters that they provide a solid presence for understanding the crimes. The chaos of the sixties, the class clashes, the unrealness of the movie industry and its dark underbelly, do not, of course, justify violence, but they place it in the context of the late sixties--a time and place so fundamental to the real and fictional events and so lacking from the parole hearings I analyze in Yesterday's Monsters. As I explain in the book, any effort by the inmates (by now people in their sixties, seventies, and eighties, very different from the squalid teenagers in the movie) to place their actions in the context of time and place is disparaged by the parole board as an effort to "minimize" accountability and as "lack of insight" about their culpability; Tarantino's movie is a reminder that these particular crimes could only have happened in this particular time and place. It is not an excuse; it is a deep understanding that matters for a culture still obsessed with the crimes and their aftermath.

In his book about the cultural impact of the Manson murders, Jeffrey Melnick critically analyzes the assertion that Manson "killed the Sixties". Tarantino has brought the Sixties back to life as never before, and you will not know exactly how until you watch this gem of a movie. And after you see it, let's talk about it.
Posted by Hadar Aviram at 3:45 PM No comments: