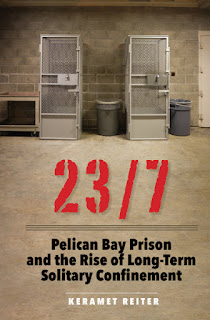 It's somewhat encouraging to read Keramet Reiter's book 23/7 in 2017, after two hunger strikes in solitary confinement and dramatic changes in solitary placement policies. Indeed, those of you who followed this blog in 2011 and 2013 remember that the list of demands made by the hunger strikers opened a window into one of our most shameful penal practices: indeterminate segregation, complete with physical and mental health neglects, social deprivations on an unimaginable scale, and a deeply problematic regime for leaving solitary (which Reiter referred to elsewhere as "parole, snitch, or die.") A prisoner-led resistance organization, organized under impossible conditions, yielded a class action lawsuit that resulted in a settlement agreement that shifted the grounds for isolation from status and gang assumptions to behavior and created less harmful alternatives.

Reiter's book, therefore, could evoke some sentiments of smugness among readers: yes, things were bad, but we overcame them and our segregation regime is much more humane than it was. But I think the book teaches us lessons whose relevance goes far beyond solitary confinement, and here is some elaboration on three of those.

First, the history of long-term solitary confinement is a classic example of penal expansion. A regime is created explicitly for "the worst of the worst," envisioning vicious serial killers from movies, quietly creeps out and starts applying to people with far less exotic criminal histories and less evidence of immediate dangerousness. This is a trend we see elsewhere in the criminal justice system as well: with sex offenders, we've seen concerns about risk creep beyond the few people who were serial predators to infect the entire universe of people convicted of sex offenses. With violent offenders, we've seen all of them painted with the same brushstroke, and serious hesitation about reforming sentencing for violent offenses (as opposed to people doing time for nonviolent drug offenses.) An idea of who is the worst infects our mind, and gradually the policies we fashioned to handle the worst expand to affect others that do not resemble this ideal type.

Second, good intentions can yield horrible consequences. The book tells the story of Madrid v. Gomez, a lawsuit involving intolerable cruelty to a solitary inmate, and reflects the horror of Judge Thelton Henderson as he was exposed to conditions in the facility. "This cannot be constitutional," he is remembered to have said, and he placed the prison under federal supervision (it remained so until 2011.) But by allowing the basic regime to continue, albeit under supervision, solitary itself became normalized, and the concern is that our desensitization to this regime allowed it to last for so long.

Third, it is not always clear how cruelty manifests itself. Is being safe, away from violent people, and without sharing a cell with companions one didn't choose, the ultimate good? Or do we find out, after decades, that isolation generates irrevocable damage to one's mental health? Recall that the early penitentiary reformers thought that solitude was good for the soul, to the point that advocates of Eastern State and of Albany battled about the best way to isolate people. Sometimes it takes years to realize just how horrible a regime is.

The book leaves open several important issues. First, by ending its account before the Ashker compromise, it avoided the classic "happy end", and it would be good to see future editions with an additional chapter on the lawsuit and settlement. And second, since solitary cells cannot be easily converted to other confinement uses, what is to become of them now? And what might be the conditions we need to worry about, which may lead to a repopulation of these cells?

The book is highly recommended, written in beautiful and lively language, and tells the story of the inmates' struggle for minimal conditions with engaging realism and empathy.
Posted by Hadar Aviram at 2:24 PM No comments:

My remarks start toward the end, at approximately 1:26.

Posted by Hadar Aviram at 12:03 PM No comments: