On Monday, the federal court of the Eastern District held a hearing challenging the classification of marijuana as a Schedule 1 drug. Among the scientists testifying was Dr. Carl Hart, whom some of you may remember from the movie The House I Live In. There's a blow-by-blow account of the testimonies in the case, U.S. v. Schweder, in this blog.
Posted by Hadar Aviram at 8:23 AM No comments:

Posted by Hadar Aviram at 9:49 AM No comments:

CCC Endorsements for the November Elections: Yes on 47 and Other Matters 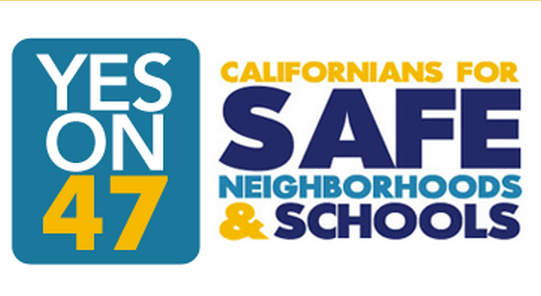 After a bit of a hiatus, CCC is coming back with some election endorsements for Californians. In this endorsement list, I point out only issues that are particular to crime, law enforcement, and corrections; of course, your vote may be influenced by other matters as well.


Prop 47 would reduce sentencing. According to Ballotpedia, which faithfully summarizes the proposition's text, if it were to pass, it would:


Right now, there is about 60% support for Prop 47. As the Chronicle observes, it seems to be stirring little controversy, and for good reason: it makes sense. You'll note that this is a classic humonetarian proposal--let's not throw low-risk people in prison who shouldn't really be there in the first place, and we'll save millions doing so. The money is going to a fund that invests in education, victim compensation, and various therapeutic projects. The arguments against it can be easily dispensed with: it won't "release dangerous people", because it takes risk into account. It is supported, in grand Cheap on Crime fashion, by people from the left and the right alike, and by victims of crime, who would rather see energy spent on violent offenders. By all means, go ahead and vote YES on 47.

Speier is one of my favorite politicians. Her work to prevent sexual assault in the military and on university campuses is admirable, as is her sensible approach to databases that would enable tracking down gun ownership. I should say, however, that if you're a Republican on other maters, you could do far worse than Robin Chew, who would work to reverse climate change and who believes in sensible regulatory reform.

Of the three Justices up for retention, I want to mention and support Goodwin Liu, with whom I've had a chance to exchange views on criminal justice matters, and who is a sensible and careful interpreter of the CA constitution.


The race is between incumbent Jerry Brown and libertarian Republican Neel Kashkari. Kashkari has no platform at all on public safety, criminal justice, or corrections, which is truly astonishing given the amount of time the Brown administration spent on these matters, and his focus on "jobs and education" doesn't seem to include the close connections between these topics and corrections. Obviously, we can't recommend him. On the other hand, Jerry Brown has maintained that the correctional problem in California has been solved, has fought the Plata order tooth and nail to the point of almost contempt of court, and has practically extorted federal judges into giving him two more years for depopulation under threat of heavy privatizing. Between a bad track record on corrections and no interest in the topic at all, I think it's a toss-up.


Yes, I know. Newsom is responsible for sit/lie in San Francisco. But do we really want Ron Nehring in the lieutenant governor's chair? He wants to repeal Realignment and build more prisons. It's a very antiquated and uninformed conservative position, one that most reasonable conservatives have already rejected. This one is a no-brainer.


Having recently heard, with a heavy heart, about Harris' intent to appeal Jones v. Chappell for reasons that don't make any sense to me, and watched, with concern, her battle against truancy stigmatize kids and parents along the way, this one is not a no-brainer for me. The correlation between truancy and crime does not necessarily imply causation, and the cause of both--poverty and social neglect--is the one that should be addressed. This campaign is failing to excite voters, but I think it's for the opposite reasons to those the Gold campaign assumes. We're disappointed because we want Harris to be smarter on crime, not because we want Gold to be tough on crime. Gold supports legalization of recreational marijuana, but he is inexperienced and does not have thought-out policies on all the issues we are addressing. For what it's worth, he urged Harris to appeal Jones v. Chappell, so death penalty issues are a toss-up. There doesn't seem to be much of a platform for rehabilitation, though Harris can cite her collaboration with the Public Defender's office on Operation Clean Slate.

California Secretary of State: No Endorsement


With Leland Yee, who despite his alleged involvement in corrupted dealings was a big champion for juvenile delinquents in the State Assembly, out of the race, we're left with a choice between Alex Padilla and Pete Peterson. No one has asked them the important question--do they interpret the CA constitution as Debra Bowen did, to exclude Realigned felons doing time in jails as ineligible to vote? While both candidates speak about the need to improve civics education, Padilla seems to be more interested in actually reaching out to people to expand the vote, but Peterson has some good suggestions for increasing the vote via early voting and other options of convenience.


Tom Ammiano is not running for reelection, and we thank him for his consistently incredible, sensible, and humane service to folks without voices and voting rights, including the thousands of people on solitary confinement. Neither in Nancy Skinner, who was an important voice for eliminating long-term solitary confinement. In District 17 (San Francisco) you'll have to pick between David Chiu and David Campos. People I respect support each of these candidates for good reasons. I'm leaning toward an endorsement of Campos, because of his important anti-gang work, but am open to hearing more.

If all you remember from this post is to vote YES on 47, I've done my job.


Posted by Hadar Aviram at 6:30 AM No comments: