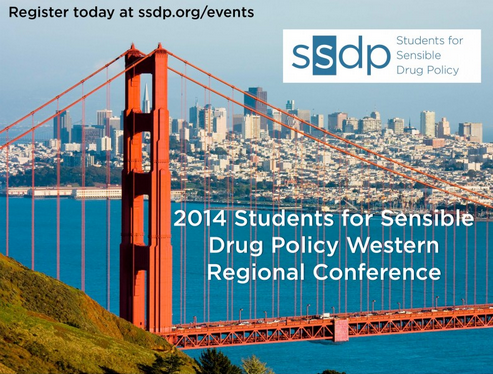 Students for Sensible Drug Policy are holding their annual conference at UC Hastings in San Francisco this coming Saturday. Yours truly will be speaking, but the real reason to show up is to hear the amazing array of health professionals, dispensary businesspeople, advocates, legislation experts, and the keynote speaker, San Francisco Public Defender Jeff Adachi. Here's the program for the day: 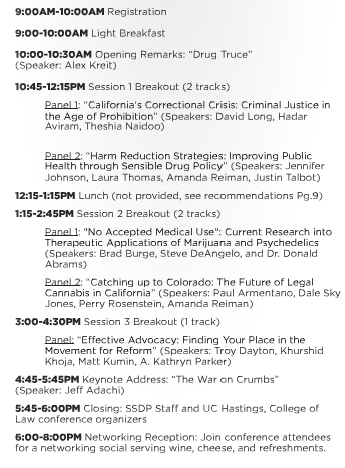 The conference is free and open to the public, but requires your preregistration here. What better way to spend your Saturday than learn more about drugs, and particularly marijuana legalization?
Posted by Hadar Aviram at 11:19 AM No comments:

A Sentence Apart: Watch Free Documentary about Families of Inmates

The powerful short film A Sentence Apart depicts the lives of three people with family members in California prisons. And until March 15, you can watch it for free with the code ASA14 by clicking this link. It's only 11:52 minutes long, and the thoughtfulness and humanity of the protagonists really shines through.
Posted by Hadar Aviram at 8:16 AM No comments:

“Those swept up in this system too often had their rights rescinded, their dignity diminished, and the full measure of their citizenship revoked for the rest of their lives,” Mr. Holder said. “They could not vote.”A couple of years after the failure of the effort to interpret voting regulation in CA so that folks doing time in jails as a result of realignment can vote, civil rights organizations are trying again. This time, the petition focuses on folks who are under mandatory supervision, who are told by the Secretary of State they can't vote.

The petitioners might have just felt some wind in their sales, blown by the federal government. Recently, Attorney General Eric Holder urged states to repeal felon disenfranchisement laws.

“Those swept up in this system too often had their rights rescinded, their dignity diminished, and the full measure of their citizenship revoked for the rest of their lives,” Mr. Holder said. “They could not vote.”

Holder was addressing life-long bans in Southern states, a holdover from the nadir of race relations in the 1920s, which render, for example, 10% of Florida citizens ineligible to vote. By contrast, California offers more opportunity for redemption (and has done so since 1974.) But this governmental animus toward enfranchisement is important to notice.
Posted by Hadar Aviram at 7:45 AM No comments:

Lots of things moving in the right direction in the world of solitary confinement. For one thing, Assemblymember Tom Ammiano has just introduced AB 1652, the product of the legislative hearings, with the intent to limit usage of solitary confinement in California. Among other things, the bill text limits confinement to serious offenses, and creates a 3-year maximum confinement if the assignment to solitary is based on gang status alone.

But there are other news as well. As some readers know, there is an ongoing lawsuit against the Contra Costa Juvenile Hall for locking up youth with disabilities for 23 hours a day. Today, the feds have joined the battle - on the side of the inmates. Disability Rights Advocates reports:

Youth with disabilities generally are disproportionately represented in juvenile correctional facilities and by Contra Costa County’s own estimate, roughly 32% of the students at the Contra Costa County Juvenile Hall have disabilities that require some form of special education. Despite their disabilities, youth at Contra Costa County Juvenile Hall are locked for days and weeks at a time in cells that have barely enough room for a bed and a narrow window the width of a hand and length of an arm. Indeed young people are routinely held in conditions like those in a maximum security prison. The results of such conditions are devastating. For instance, named Plaintiff W.B. was placed in solitary confinement for more than 90 days, during which time he deteriorated mentally to the point where he was smearing feces on the wall and, ultimately, was held in a psychiatric hospital for three weeks.

“United States Department of Justice and Department of Education involvement in this case should be a wake-up call to Contra Costa County and the County Office of Education,” said Laura Faer, Statewide Education Rights Director. “Every day more young people are harmed by their failure to take responsibility and follow federal and state law. These flagrant violations of children’s rights to education and rehabilitative services must stop.”

Note that the feds are dressing their objections to this practice as an educational issue: that is, the problem is not that segregation is cruel and unusual per se, but that it hampers these students educational opportunities. Even on such a narrow basis, it's remarkable that the feds have found it politically sayable to oppose these practices and place themselves squarely on the side of the inmates.

Posted by Hadar Aviram at 11:45 AM No comments:

The SHU hearings in Sacramento yesterday were a success from the inmates' rights perspective. The Sac Bee reports:

Corrections officials have touted a new pilot program allowing inmates to ease their way out of solitary confinement, and regulations recently submitted to the Office of Administrative Law would allow the pilot to be applied throughout the prison system.

But legislators seemed skeptical that the changes would substantially reduce the practice of walling off inmates in the "Security Housing Units," or SHU, that exist in four state prisons.

Later in the day, Ammiano announced a bill that would cap "administrative" terms in the SHU - those not related to a specific incident, which would include stays stemming from gang affiliation - at 36 months. The legislation would also allow inmates to exit more quickly by accumulating good behavior credits.
Posted by Hadar Aviram at 1:38 PM 1 comment:

I'm hard at work on book revisions and other projects, and updates have been scarce. But there are lots of big news, so here is a roundup of links:

A new lawsuit by civil rights organizations tackles the voting rights of people who, post-Realignment, are under a regime of Mandatory Supervision.

The Brown administration has received a two-year reprieve from the three-judge panel on the decrowding timeline.

More on these in the days to come.
Posted by Hadar Aviram at 10:26 AM No comments:

Tune in NOW for the legislative hearings regarding the SHU, gang validation policies, and the new CDCR regulations to remove gang status.
Posted by Hadar Aviram at 10:05 AM No comments: