Is the Death Penalty Too Expensive? 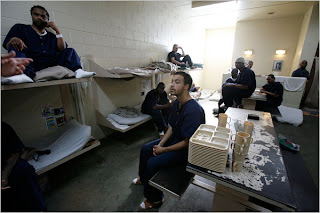 The New York Times reports on a trend we've already seen here a couple of times: penal reform and punitive measures being abandoned not on their merits, but because of their costs. The article is not California-specific; the picture you see is from Virginia, and the data in the piece come from Maryland.

Nevertheless, the point is an interesting one: whatever the public thinks about the death penalty, it's expensive, and several states are abandoning it in light of the costs.

Death penalty opponents say they still face an uphill battle, but they are pleased to have allies raising the economic argument.

Efforts to repeal the death penalty are part of a broader trend in which states are trying to cut the costs of being tough on crime. Virginia and at least four other states, for example, are considering releasing nonviolent offenders early to reduce costs.

What about the CA costs? The California Commission for the Fair Administration of Justice provides some data. The report offers abundant information on other aspects of death penalty administration, pointing primarily to long delays in carrying sentences and to inadequate representation. However, if the fiscal argument is the one that might win the day, the bottom line is as follows:

The additional cost of confining an inmate to death row, as compared to the maximum security prisons where those sentenced to life without possibility of parole ordinarily serve their sentences, is $90,000 per year per inmate. With California’s current death row population of 670, that accounts for $63.3 million annually.

The report makes a variety of suggestions regarding reforms in death penalty administration, including guarantees for adequate representation. Those in themselves might be quite costly, and the public might be as reluctant to implement them as the legislators were when they killed the planned expansion to the San Quentin Death Row just a little while ago. One wonders how the new trend in other states may play out in California, or at least in counties in which the prosecution actually seeks the death penalty.
Posted by Hadar Aviram at 1:37 PM