When Our Monsters Age and Fall Ill: Thoughts on Susan Atkins' Life and Death 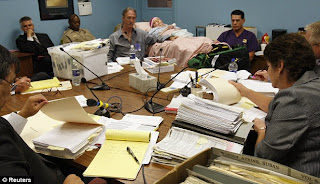 Susan Atkins, member of the notorious Manson Family and participant in heinous and violent crimes, passed away at the age of 61. The L.A. Times features an excellent, detailed story on Atkins' life, her crimes, and her time in prison, including the brain cancer that put an end to her life. Atkins served 38 years in prison, and in her last years lost a leg and became paralyzed as a result of her cancer. She was repeatedly denied parole in light of the severity of her crimes.
The Atkins case is an illustration of the important place retributivism still occupies in the public consciousness. Retribution was the only reason behind the denial of Atkins' parole. She was terminally ill, fully (and apparently honestly) remorseful of her part in the Manson murders, and clearly incapable, physically and otherwise, of committing any further crime. In that sense, the Atkins case is a pure example of the power of such considerations.
The extent to which we defer to retributivism when dealing with a symbolic act that has colored much of our attitudes and imagination of crime in the late 1960s and beyond is a serious question, but I think the more interesting question is whether less extreme cases, involving less notorious acts, would merit the same deference to retributivism when making parole decisions. In the majority of cases, aging and health may give rise to considerations of declining risk and propensity.
Theories of life-course criminology have been quite a trendy field in criminology over the last few years. A good intro to this field is this great piece by Robert Sampson and John Laub. The nice thing about the article is its sensitivity to variation in types of crime, as well as to "turning points", such as marriage, which dissuade some offenders from crime. Sampson and Laub also do a good job at describing the limitations of using life course criminology as a predictive tool for release. Nevertheless, the trends are thought provoking, especially when we are presented with veteran inmates such as Atkins, who have been in prison for decades and decades. Add to the mix the budgetary implications of treating the old and the infirm, and we can question the value of retributivism as an overriding, all-powerful ideology of incarceration and release.
Posted by Hadar Aviram at 12:14 PM