Aaron Vargas and the Limits of Accountability 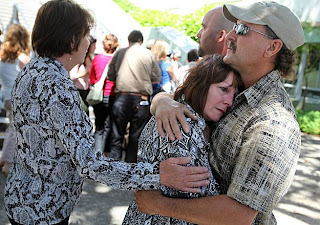 Yesterday's Chron covered the sentencing of Aaron Vargas, convicted of murdering his neighbor, Darrell McNeil. After the murder, allegations surfaced according to which McNeil had abused Vargas since the latter was a young boy. Vargas, who expressed regret about the killing and testified that he did not go into McNeil's home with the intent to shoot him to death, was supported throughout his trial by family and friends who put together a website and organized a petition on his behalf.

From the Chron piece:

Vargas' family and defense team had hoped he would be sentenced to the 16 months he has already served in county jail, plus probation, and go free Tuesday. They would have settled for perhaps a five-year sentence.

But they said they never thought he would get anything so close to the maximum 10 years in state prison available under the plea deal the former odd-job worker struck in April with the district attorney in exchange for pleading no contest to voluntary manslaughter. Prosecutors had sought 50 years to life in prison before the plea deal.

"I'm very satisfied with the sentence," said Assistant District Attorney Beth Norman. "This was a difficult case, and I don't think anybody could come away relieved."

Vargas argued that he hadn't intended to kill McNeill, just to scare him away from bothering him and his family. Judge Brown bought only part of it.

While expressing little doubt that Vargas was raped by McNeill, Brown said that "to grant probation in this case would put a stamp of approval on the defendant's actions, which I cannot do."

"The use of violence to correct a wrong only encourages more violence," the judge said.

This terrible tragedy raises important and difficult questions, which go to the core of how we define accountability, how we operationalize sympathy, and how we value human lives in comparison to each other. As we know, the establishment of guilt in a criminal trial is a binary decision - guilty/not guilty - and criminal defenses specify very narrow terms under which an otherwise criminal act is justified and excused. Having been abused in the past does not award a defendant a complete carte blanche; to be acquitted for self defense, the danger to the defendant must be immediate and grave. However, with sentencing or charging we can be more flexible and some states are more lenient toward convicted murderers who were abused by their victims in the past. This doctrine was developed as "battered woman syndrome" or PTSD under the umbrella of mental problems that do not amount to a full insanity defense. In this case, the social reaction is rather interesting. It may be that some of the public rage about the sentence has to do with the gender aspects of this case. It is more probable, however, that the broad sympathy for Vargas comes from our antipathy toward the least-liked group of offenders: Child molesters and rapists. It is a difficult question whether we want our criminal law to reflect the idea that a child rapist deserves what he or she gets if murdered by his/her victim. The question of sentencing flexibility is a bit easier: we could still officially condemn murder, and yet find a way, sentence-wise, to not make the murderer pay the price in such situations. But whether we contemplate guilt or sentence, we are still asking, in essence, the same question: Is killing a child molester more understandable than killing someone else? More justified ? Or, for those of us who would punish murderers out of retributivism, is the life of a child molester worth less than the lives of other potential murder victims?
Posted by Hadar Aviram at 5:55 PM

I think its worth considering the fact that voluntary manslaughter necessary includes a legally cognizable "provocation" which is not sufficient to establish self defense but is sufficient for society to mitigate the moral culpability of the defendant.

Thus, to say that giving the defendant anything less than the maximum sentence would be condoning violence misses the point of the voluntary manslaughter charge, which is that society recognizes this individual was provoked by the victim into acting, perhaps not contemporaneously with the act but certainly as the result of the cumulative effect of abuse.

That said, we don't know how the victim was killed, what evidence existed of premeditation, and whether experts testified as to his mental state at the time of the crime.

My guess is that the Judge did not consider this case appropriate for a voluntary manslaughter charge because of the degree of premeditation, which normally precludes a provocation defense because it incorporates an adequate "cooling off" period, and the fact that here, the defendant put himself in the position to be provoked when he arrived at the victim's home, and when he brought a weapon with him (which tends to weigh against the defendants statement that he did not intend to shoot the victim). Accordingly, he sentenced him to the maximum sentence which more closely resembles a second degree murder charge.

I'll hasten to point out that such accusations are always easy to make against dead people. In this case, there may have been some evidence of past abuse or not from someone other than the accused (I didn't see any). There's a risk of potentially spurious claims of abuse in cases like this.