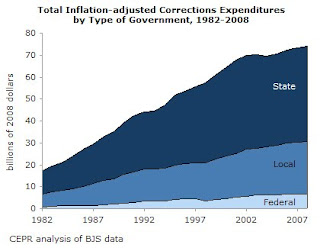 The Center for Economic and Policy Research has issued this report, which analyzes the savings potential of releasing one half of non-violent offenders. 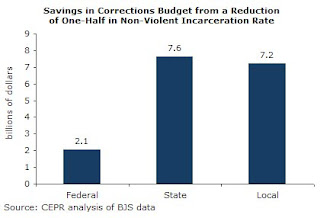 The argument is that such mass releases would not adversely impact public safety. As the report explains,

But is this true? Calculating the extent to which incarceration is the outcome of an increase in crime is a tricky task. One way of looking at this issue is by estimating how much crime reduction we have achieved by increasing our usage of incarceration. The data is not encouraging.

In his book Punishment and Inequality in America, Bruce Western carefully considers data from a variety of sources to estimate the past played by incarceration in crime reduction. Reasoning that the decline in crime rates cannot be attributed to rehabilitative programs in prison (seeing as mass imprisonment has not really been accompanied by developments in that field) he concludes as follows:

Studies of the impact of the prison boom on the crime drop have focused on the deterrent and incapacitative effect of incarceration. Leading studies suggested that the growth in state imprisonment rates through the 1990s can explain one-third of the drop in serious crime. My best estimate suggests that the 66-percent increase in the state prison population, from 725,000 to 1.23 million prisoners reduced the rate of serious crime by 2 to 5 percent – one-tenth of the fall in crime between 1993 and 2001. Fully 90 percent would have happened without the 480,000 new inmates in the system. In 2001, the annual cost of incarcerating a state prisoner was $22,000. This suggests that the 2- to 5-percent decline in serious crime over the eight years from 1993 to 2001 was purchased for $53 billion.

When we split the sample into two equal time periods, we find crime-prison effects for the latter period that are less than one-third the size of those for the earlier period. For 1978 to 1990, we estimate that each additional prison year served prevented approximately 30 index crimes. For the period from 1991 to 2004, the comparable figure is eight. Moreover, this decline in level effects corresponds to substantial declines in crime-prison elasticities, suggesting that the constant-elasticity specification often used in previous research under-estimates the degree to which the crime-abating effects of incarceration decreases with scale.

This large decline in the marginal effect of an inmate suggests that the most recent increases in incarceration have been driven by the institutionalization of many inmates who, relative to previous periods, pose less of a threat to society. Indeed, given the much lower crime- abating effects for the most recent period, it is likely the case that for many recent inmates, the benefits to society in terms of crime reduction are unlikely to outweigh the explicit monetary costs of housing and maintaining an additional inmate. Moreover, once one accounts for the additional external costs of incarceration, such as the adverse effects on the families of inmates, the effects on victimizations behind bars, the effects on additional HIV/AIDS infections (Johnson and Raphael 2006), and the potential effects on the long-term employment prospects of former inmates, the benefit cost ratio on the margin is likely to be substantially below one.

Thanks to Ocean Mottley for the CEPR report, and major props to Josh Guetzkow for the sources.
Posted by Hadar Aviram at 6:59 PM