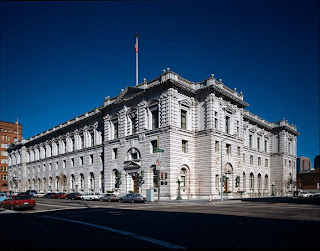 Yesterday morning the Ninth Circuit heard oral arguments in Gilman v. Schwarzenegger. As some of our readers may recall, petitioners challenged the changes made in Prop 9 to the parole hearings, and in particular the deferrals in holding parole hearings. The District Court, after finding out some statistical information about the timing of hearings before and after Prop 9, ruled on behalf of the plaintiffs. The Governor appealed, and the Ninth Circuit will regard the arguments as pertaining not only to the specific prospective parolees, but to the entire class of parolees as well.
The main premises of the Prop 9 changes to parole hearings are outlined in this excellent memo from the Prison Law Office. As the memo explains, Prop 9, marketed as a victim rights proposition, actually made substantial changes to the way parole hearings are conducted. The topic of yesterday's arguments was the provision lengthening the time before an inmate is eligible for a parole hearing.
In the arguments yesterday, the Judges asked whether it made a difference that the new law has a "safety valve", that is, a provision that allows for an expedited hearing at the parole board's discretion. The governor's representative replied in the affirmative. According to the state, the existence of the safety valve rules out any sort of statistical confidence that a given inmate would be necessarily worse off by the Prop 9 provisions. After all, a given inmate might receive an expedited hearing and be released faster than he or she would under the old law. The attorney, however, left open the possibility that statistical evidence to the contrary might be provided in the years to come. Another problem the judges had was related to the fact that in other cases in which such "safety valves" left the law intact, the default was serving the minimum sentence, whereas after Prop 9 the default is serving the maximum, unless the expedited review is provided.
The representative for the original plaintiffs did not think that the "safety valve" rules out the possibility to argue that, as a class, inmates are worse off after Prop 9. First, the ex-post-facto review the court has to pursue is irrespective of any "safety valves", as other cases prove. And second, the terms are very problematic. Expedited review is an option only if there are new circumstances or a significant change, and it is a complicated request to make, paperwork-wise and timewise. An interesting question was whether expedited reviews should only be available if circumstances change, given the fact that different panels might rule differently on the fate of a given inmate.
We will follow the litigation and report on the results. Stay tuned!
The full oral arguments can be heard here.
Posted by Hadar Aviram at 2:39 PM