Do Not Cure Overcrowding with More Prison Construction! 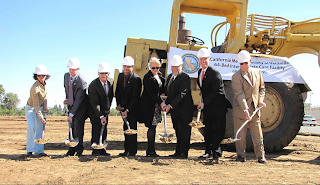 (image courtesy CDCR from a report on AB 900 projects)
About a year and a half ago, we reported on a study showing that population reduction orders may have adverse consequences: they lead to greater expenditures and the money comes from the welfare budget. Today we learn, via the Prison Law blog, that prison litigation may have other unsavory consequences.

Here is the abstract of Heather Schonfeld's Mass Incarceration and the Paradox of Prison Conditions Litigation:

In this article I examine how prison conditions litigation in the 1970s, as an outgrowth of the civil rights movement, inadvertently contributed to the rise of mass incarceration in the United States. Using Florida as a case study, I detail how prison conditions litigation that aimed to reduce incarceration was translated in the political arena as a court order to build prisons. Drawing on insights from historical institutionalist scholarship, I argue that this paradox can be explained by considering the different historical and political contexts of the initial legal framing and the final compliance with the court order. In addition, I demonstrate how the choices made by policy makers around court compliance created policy feedback effects that further expanded the coercive capacity of the state and transformed political calculations around crime control. The findings suggest how “successful” court challenges for institutional change can have long-term outcomes that are contrary to social justice goals. The paradox of prison litigation is especially compelling because inmates' lawyers were specifically concerned about racial injustice, yet mass incarceration is arguably the greatest obstacle to racial equality in the twenty-first century.

As our readers will recall, this unhealthy dynamic played out perfectly in the oral arguments of Plata/Coleman. More than ever, and as I explained here and here, I am convinced that the inmate advocates should not have conceded that the three-jduge panel would consider new construction a suitable solution to the overcrowding problem. While her emphasis is on racial justice litigation and its discontents, Schonfeld's findings also strongly confirm what anyone with common sense and some knowledge of prison history should know by now: If you build it, they will come. Any attempt to solve overcrowding through construction is an expensive short-term solution that will yield more overcrowding in the future. If we're not humanitarian, let's at least be humonetarian, and solve our prison crisis with early releases and a parole program that offers real hope and an escape from recidivism and the revolving door.
Posted by Hadar Aviram at 7:52 AM

Thanks for sharing nice info with us.