Movie Review: On the Outs 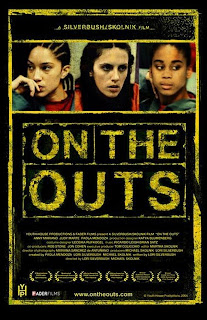 Lori Silverbush and Michael Skolnik's 2004 movie On the Outs is a heartbreaking, empathetic peek into the world of three girls caught in the juvenile justice system. The script grew from the directors' experience bringing a workshop into a juvenile detention center in Secaucus, NJ. Their familiarity with, and empathy toward, the girls is palpable and moving, and their experiences getting to know the inmates have made the film credible.

Suzette, a 15-year-old living with a stern, involved mother, meets a guy in the street. Her infatuation with him leads to an unplanned pregnancy and running away from home. As she meets his friends and gets introduced to his world, she learns unpleasant realities about their relationship; she eventually gets arrested when he drops a murder weapon into her bag. Her world begins to spiral out of control, and her well-intentioned mother is powerless to keep her away from the streets.

Marisol is first shown as a dedicated single mother, playing with her daughter in the yard. We later learn that she relies on her grandma in raising her child, as she is hopelessly addicted to crack; her arrest after a car accident leads to losing her child to the foster care system. Marisol's raw desperation at losing her child is matched in intensity by her continuing need for the drug; she is unable to face and overcome her addiction.

Oz, the daughter of an addict, is the family's breadwinner; a tough drug dealer, she holds her own in the streets, and has a soft spot for her brother, Chuey, who suffers from mental disabilities and from asthma. Her frustration with her mother's addiction and her protectiveness of her brother are moving and complement her street wisdom and straight talking, which make her the unofficial leader of the juvenile facility.

Each girl sees the lives of other girls through the prism of her own experiences; Oz, for example, is exasperated with Marisol, because she sees her own helpless mother in her. Suzette, a newcomer to the juvenile justice system, is apprehensive and afraid of the more hardened inmates, but gradually loses her innocence as her romantic dreams fall apart. The girls' relationships - with their families, with men, with the streets - are woven together to present a tapestry of dysfunction, exploitation, and miscommunication.

All three girls are movingly and convincingly portrayed. The clever script does not shirk away from presenting personal responsibility when appropriate, but places it within the context of environment and circumstances. Suzette's story was particularly touching to me, because it echoed what I learned this year from the GEMS foundation and from their excellent documentary Very Young Girls. Shying away from generalizations and heavy-handed social critique, the movie focuses on the personal, intimate details of the girls' lives, leaving it to us to connect the dots.

On the Outs is available for live streaming from Netflix, and might be part of our criminal justice film club next fall.