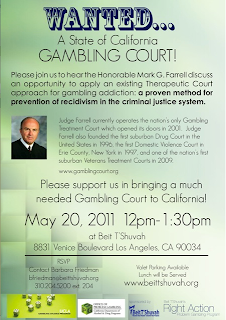 Some of the problem-solving programs are fairly old and well established. An upcoming event in Los Angeles examines the possibility of creating a gambling court, built upon the existing therapeutic program Beit T'shuvah (some of whose residents come from jail, but is not an official sentencing possibility.) It promises to be an interesting evening.

I wonder what our readers think about the potential for a gambling court. If one accepts the rather established notion that gambling, like alcoholism and narcotics, is an addiction/disease, integrating such programs into the courts falls into the problem-solving pattern rather neatly by dealing with issues holistically. Looking forward to learning more about Beit T'shuvah, particularly about any research done on the impact of the program on recidivism rates and rehabilitation.
Posted by Hadar Aviram at 3:08 PM

I believe that gambling addiction is real and know that up here in the bay area, Chinese communities are disproportionately impacted and have begun to organize at a community level. I don't really know much about the circumstances in which the courts are most frequently coming into contact with licit/illicit gambling. If somebody's running an illegal gambling ring, I don't think they need a therapeutic court model. But if somebody has stolen money from their family and friends to feed their gambling addiction, then yes, the judicial system should be empowered to address circumstances leading to the crime. I was raised to think that gambling and the lottery are for idiots. It's sad to see it become a part of so many people's lives.

I attended this presentation. There were things about this that troubled me, not just the added layers of bureaucracy - The gambling court judge shared that the defendant must plead to the highest charge; this bothered me. Also He, as well as his Los Angeles Drug Court co-panelist, were quite strident about needing the "hammer" of flash incarceration. Both clearly believed incarceration is the way to deal with "addiction." It seemed to me the potential to cherry-pick clients (I did ask who assesses appropriateness??...)and the potential to cast a "criminal charges" wide net for gambling court participants makes this not my idea of a good thing. I repeat, the defendant must plead to the highest possible charge and make it though... I am thinking this could lead to many very long sentences that could have been pled down to probation. I won't even go into funding, which we can't get for the Drug Court mandated programs now... Having said all that, compulsive gambling is very much a new market for residential rehabs and will no doubt flourish in private settings.