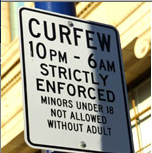 Recently, the Oakland City Council degerred voting on a proposed juvenile curfew, titled the "Juvenile Protection Act". Is it a good idea to enact such curfews,and what is their effect on crime?

Some evidence, including this paper by Patrick Kline, suggest that youth curfews overall are effective in reducing crime for the juveniles below curfew age, but have no spillover effects above the curfew age. The study's population was that of cities with a 1990 population greater than 180,000, and compared cities with municipal codes that included youth curfews. The focus was on serious felonies, as other offenses could be attributed to police behavior rather than to youth criminality. The arrest data, he says--

suggest that being subject to a curfew reduces the number of violent and property crimes committed by juveniles below the curfew age by approximately 10% in the year after enactment, with the effects intensifying substantially in subsequent years for violent crimes.


The magnitude of any biases in the estimates due to spillover effects is difficult to assess. The data do not provide evidence of any spillovers, though given the imprecision of the estimates we also cannot reject modest sized effects. It does seem safe to say that there are probably not any large spillover effects, meaning that curfews do not seem to reduce crime in general, but rather only for the targeted age-groups. This suggests that cities designing curfew legislation should choose the statutory curfew age carefully according to which age-groups are in greatest need of intervention.

However, for Oakland and San Francisco specifically, there are reasons to be skeptical. A recent piece by Mike Males in the Chron was a good reminder of the fact that the US seems to be the only country that its citizens "can shop happily only when everyone under 18 is under house arrest. Not even in London during recent riots - and certainly not in Hong Kong, Tokyo, Rome, Mexico City, Rio de Janeiro, Toronto or other major cities - do police forcibly sweep young people off the streets."

Today's op-ed by Selena Teji makes similar arguments. Examining curfews and incarceration, she notes that the plummeting rates of juvenile crime in California are not due to incarceration-driven policy. In fact, she says, "over the last 15 years, California’s youth prisons and local youth jails have released more than 10,000 formerly incarcerated youths onto the streets and in 2010, California youth crime stands at an all-time low."

Incarcerating, therefore, is not a great idea. Would judicious use of curfews minimize our reliance on incarceration? That's unclear. But it would seem that, before making a decision about such steps, we should pay attention to actual crime rates, rather than to our perception of crime.
Posted by Hadar Aviram at 2:34 PM