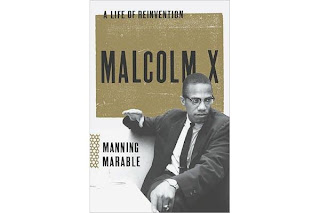 For years I have been assigning portions of the classic Autobiography of Malcolm X, as told to Alex Haley, to my Theoretical Criminology students. Whenever we discussed race and crime, and the prison industrial complex, we came back to the prison as a locus of political rebirth and resistance, and the Autobiography provided a convenient literary vehicle to start the discussion. I feel deeply enriched by this new, inclusive and fascinating volume, which sheds light from multiple perspectives on Malcolm X's life, and particuarly for illuminating corners that the Autobiography has missed.

Manning Marable, who sadly passed away from grave illness days before the biography was finished, spent years reading countless archival materials and interviewing important figures in Malcolm's life to provide us with a complicated picture of the man and his ideology. As the title suggests, Marable's narrative organizes Malcolm's life around the numerous transformations of his worldview and image.

Some of the focus on the book has related to Marable's revelations about Malcolm's personal life, which provide much more detail and accuracy than in the Autobiography. The book lays out a rich introduction about Malcolm's family, his father's murder, and the ways in which his childhood experience had shaped his political thinking. Even in the years preceding his conversion to Black Islam, he was not an apolitical man living in an intellectual vacuum; rather, even his early thinking was heavily influenced by the Garveyism with which he grew up. Of special interest to readers of thsi blog will be Marable's account of Malcolm's career in crime, which apparently was significantly aggrandized for rhetorical purposes. Marable does not shy from details about Malcolm's intimate life and relationships, with particular emphasis on his trouble marriage to Betty Shabazz. It is this part of the book, presumably, that led his daughter, Ilyasah, to resent the publication to the point of giving this agitated interview to NPR. But I find those details less of interest, except to the extent that they illustrate what should be obvious: that the pop culture icon is but one facet of a complicated man, with virtues and flaws, like the rest of us. To me, that does not make Malcolm's life's work any less revolutionary and astounding. What is more interesting, politically and ideologically, is the astounding series of transformations Malcolm went through, cut short by his tragic assassination.

Marable's account of Malcolm's career in the Nation of Islam highlights the complexities of working within a deeply hierarchical organization. A nuanced analysis of Malcolm's speeches during this time, including the infamous "chickens come home to roost" comment (finally put in context) reveals his struggle between being his own person and his loyalty to Elijah Muhammad. It also reveals the inner workings of the organization, complete with power plays at the different Mosques and at the Chicago headquarters, and the ways in which Malcolm's charisma and quick ascension to power frightened the people who initially nurtured and revered him. Similarly, the book shows the unraveling of Malcolm's relationship with Muhammad and the process of his ousting from the Nation of Islam as a mix of ideological and ethical issues. Previous accounts of the unraveling of Malcolm's relationship with Nation of Islam have focused on his disgust with Elijah Muhammad's sexual escapades and his treatment of his numerous mistresses and illegitimate children, but have glossed over Malcolm's gradual understanding of the serious flaws in a program of Black separatism and apolitical stance. Marable provides blow-by-blow accounts of Malcolm's debates on the media with civil rights advocates, particularly Bayard Rustin, exposing the strengths and weaknesses in Malcolm's program. Beyond the personal and ethical issues he might have had with Muhammad's personality or with the Nation of Islam's theology (to which he was gradually exposed as he became better acquainted with mainstream Sunni Islam), these accounts show that his parting from the Nation was a natural consequence from his growing understanding that political action was essential.

Particularly precious are Marable's detailed accounts of Malcolm's trips to Africa and the Middle East. Relying on numerous interviews, letters and Malcolm's own journal, we see him go through a series of intellectual transformations, embracing racial inclusiveness, and coming to see the challenges of race in America through the prism of international human rights. This progression of ideas was too quick-paced for Haley to be able to fully capture in a book written and published in 1965, but from the vantage point of later times we are able to appreciate that Malcolm was still undergoing important ideological and spiritual changes as he was struggling to construct a platform for activism. These changes - particularly his embrace of Pan-Africanism and universal Islam as detached from skin color, and his interest in presenting the case for American Blacks on the international stage - were naturally confusing to his followers, who remained behind when he was on his trips, and who were for the most part people who remembered him well from his Nation of Islam days and still embraced, at least partly, the old ideology. This phase of confusion, which was never fully over, was enhanced by the tensions between Malcolm's two post-Nation-of-Islam organizations: Muslim Mosque, Inc., and the secular, human-rights oriented Organization of Afro-American Unity. Marable aims at sketching some possible directions that these organizations might have taken if not for Malcolm's death.

Finally, the book provides a prism of perspectives on the assassination, strongly suggesting that the wrong people were apprehended and pointing at some directions to reveal the full assassination plot  that have not been adequately investigated; it was Marable's hope that the book would lead to a reopening of the murder investigation.

How does Marable's book change the experience of reading the Autobiography? As Marable himself points out, the best way to read and appreciate the Autobiography is as a memoir rather than a work of documented truth. Readers of the Autobiography are advised to keep in mind that Haley was not without his own perspective on Malcolm, and that both he and Malcolm had important agendas when creating the Autobiography. It is also important to keep in mind the timing of the Autobiography's publication, which explains why the fascinating transformations that followed Malcolm's departure from Nation of Islam are left, for the most part, without serious treatment in the Autobiography. I think that reading the two books as companions provides a thoroughly rich experience, one that does justice to an important and enigmatic leader whose legacy informs many of the struggles we still face today, including the struggle near and dear to our readers' hearts--the struggle for social and racial justice in the context of mass incarceration.
Posted by Hadar Aviram at 7:57 PM