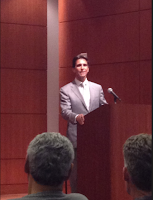 This evening I attended a town hall event with Senator Mark Leno and other guests. The event focused on criminal justice reform in California, but most of the time was spent discussing San Francisco's policies and practices. It was, for the most part, a happy occasion, with plenty of opportunity to celebrate San Francisco's sensible approach to law enforcement and corrections.

Senator Leno opened by giving some historical background. Ten years ago, when he started chairing the Public Safety Committee on the Assembly, California was spending 5.3% of its budget on corrections. That rose to 11% pre-realignment. But we've turned a corner. In 2014, this figure will be lowered to 7%. And, despite not incarcerating as many people (actually, being the county that incarcerates the least amount of people!), San Francisco is experiencing record low rates of violent crime. How are we doing this without recurring to mass incarceration?

There are a few things that are in the works. The unsuccessful attempt to reclassify simple possession, a misdemeanor, as an infraction, might be resuscitated. We're beginning to make use of medical parole (trying to save $150 million dollars spent on health costs and security costs involving treatment of inmates who can't take care of their basic needs, some of whom are actually comatose.)

The main achievement has been the enactment of SB 678, the counterpart to AB 109, which creates community corrections. Shifting the responsibility for the post-sentence phase to the counties was accompanied by a shift in approach. Wendy Still, the Chief Probational Officer, spoke of her 26 years of experience in corrections and of moving to the counties to make a difference before people come to state prison. New admissions to prison are now down 37% statewide, and 47% in San Francisco, which always held the lowest prison rates and has reduced them now even further. The probationers, now addressed as clients, are no longer perceived to require surveillance and supervision, but rather services to help them get their lives on track. The system of incentives has been modified so that reduction in recidivism makes a difference. The money that counties received upfront to set up SB 678 - $45 million in federal stimulus grants - yielded &180 in correctional savings.

David Onek from UC Berkeley's center on criminal justice mentioned the unique nature of San Francisco's criminal justice apparatus and the remarkable collaboration between its different agencies. While it is, he said, too early for a realignment report card, it seems that San Francisco was well ahead of the curve for a long time.

Jeff Adachi talked about the work that still needed doing: Fixing the racial disparity in San Francisco's correctional institutions and seriously improving our reentry services. One measure taken toward the latter is Clean Slate, which helps folks with convictions start anew and put their lives on track.

Sheriff Ross Mirkarimi said that San Francisco jails are remarkable in that they are undercrowded. He also spoke of his wish to be the first sheriff to request less beds, or to rebuild dilapidated institutions with less beds than they had in the first place.

Commander John Murphy of the SFPD talked about the collaboration between the city's different agencies, and of the effective reduction in violent crime (16% less shootings.) The focus is on Anthony Braga's hot spots - apparently, 50% of all violent crime in the city happens in 2% of its geographical area, which allows the police to focus their efforts in this area, involve community organizations, and shift the attention away from low-level drug offending (arrests for drug offenses have gone down from 50-100 a day to less than 10.)

It was a self-congratulatory evening, but rightly so; San Francisco has much to take pride in. And, as a side note, it was rather delightful to see a large contingent of the awesome United Playaz in the audience. So glad to see young people politically involved.
Posted by Hadar Aviram at 9:49 PM