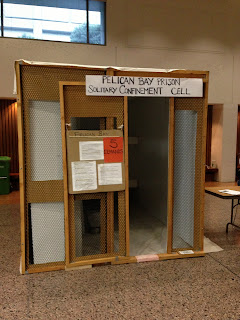 
What an incredible evening we had at UC Hastings Tuesday night! Our wonderful panel titled “Pelican Bay Hunger Strike Resumes: The Continued Struggle to End Long-Term Solitary Confinement in California” was accompanied by a life-sized model of a solitary confinement cell found in California’s Secure Housing Units (SHU). Urszula Wislanka and Penny Schoner from the Prisoner Hunger Strike Solidarity Coalition were extremely helpful in getting the model SHU prison cell set up for tours. The model SHU cell is a life-sized 8'x10’ windowless cell that the Prisoner Hunger Strike Solidarity Coalition brings to various events in California. It is eye-opening for people to actually step inside and get a small glimpse of the tiny, cramped space that many prisoners held in solitary confinement have to live in for decades. On a table to the side of the model SHU, we had letters that people could send to Governor Jerry Brown, explaining how they felt when they stepped inside the cell. The Governor has been largely silent on the issue of solitary confinement in CA prisons, and we want to urge him to respond meaningfully to the torture that has been going on for far too long, since even before Pelican Bay State Prison SHU was constructed in 1989. 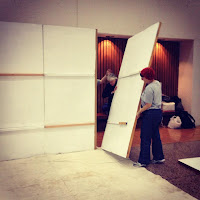 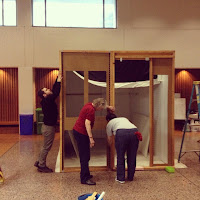 As we watched people enter and emerge from the model SHU, we were able to see the shock on their faces when they experienced how claustrophobic that small space made them feel, even for just a few moments. Many people said they were surprised by how small the cells are, how many hours prisoners are held in their cell per day, and how many years prisoners are kept in solitary confinement! This sense of shock is the reason we need to have as many events like this as we can; most people simply do not know that this torture is going on in their beloved State of California. 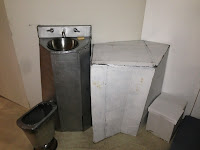 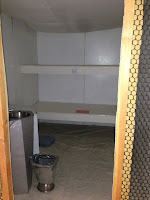 The panel was moderated by the lovely Hadar Aviram, who did a wonderful job introducing all the panelists and asking the right questions to get the discussion going. The first panelist to speak was Charles Carbone, a seasoned prisoner rights lawyer and counsel on the Ruiz v. Brown lawsuit filed by prisoners who have spent more than ten years in SHU, who is well-versed on the intricacies of CDCR's policies and rhetoric. He outlined a history of solitary confinement, explaining the 19th century puritan societal worldview that giving a person a Bible and sending them to do "penitence" in solitary confinement would reform them. Ultimately, that policy experiment was deemed a rehabilitative failure, but American government has embraced solitary confinement anew in recent decades. Carbone also challenged CDCR's "new" policies as being even worse than their former practices. Prisoners are still being held indefinitely in solitary confinement for their political and cultural tattoos, artwork, and written material that prison officials deem "gang activity,” without any evidence of violent or threatening behavior, and with no meaningful opportunity for release.

Steven Czifra and Jose "Danny" Murillo, UC Berkeley students who have both been incarcerated for years in the SHU, went on to describe their experience of long-term extreme isolation in the SHU. We were haunted by Steven’s analogy that the SHU is just like “a bunch of ghosts trying to cheer each other up." He repeatedly mentioned how kind and humane people in the SHU acted towards each other. "It only took one person who believed in me," said Stephen. Stephen is now studying English at UC Berkeley and has a wonderful family life. Danny said that growing up, he struggled with anger issues and was never the best student. During his time in the SHU, he was inspired by the help and encouragement of his fellow inmates who believed in him. He earned his GED and took some college classes through the educational programming CDCR has since eliminated from the SHUs. Danny is now an undergraduate student at UC Berkeley in the Ethnic Studies Department. And to think that these two were labeled the "worst of the worst!"

The next speaker Terry Kupers, is a clinical psychiatrist and expert on the mental health impacts of long-term solitary confinement. Terry testifies in a lot of litigation involving jail and prison conditions and how those conditions affect prisoners' mental health. He was right on the money with everything he said last night. Terry emphasized the important fact that locking people up in solitary confinement does not reduce the violence rate in prisons. In fact, research has proven the opposite. He also emphasized how the Eighth Amendment's ban on "cruel and unusual" punishment and "torture" were essentially the same; the only difference is that we don't like to talk about torture here in the United States. We like to think of torture as something that goes on in distant "less civilized" countries. We are uncomfortable with the idea that our government tortures its citizens, but until we acknowledge that this is happening, there will be no change. If the only way to escape solitary confinement is to "parole, debrief, or die," how is that anything but torture?

Marie Levin spoke about how solitary confinement hurts other people besides just the prisoners in solitary; in particular, their family members and the communities they have been removed from. Marie is the sister of Sitawa Nantambu Jamaa, who has been in the SHU at Pelican Bay since 1990. She has not hugged her brother in over two decades and has only been able to see him 10 times since he's been at Pelican Bay. She told the heartbreaking story of their sister Carol's death in 2010. Carol had kidney failure in 2001 and after discovering this, Sitawa wanted to donate a kidney to save his sister's life. The prison would not allow him to make the donation, and after years of fighting this, Carol died in a puddle of blood after a dialysis treatment. This is just one of the many horrifying stories brought to you by California’s solitary confinement regime. Ashley, co-author of this article, had the privilege of meeting Sitawa last week on our visit to Pelican Bay, and when he told this same story, she had to fight back tears.

Azadeh Zohrabi, a Soros Justice Fellow, Hastings alum, and the brilliant woman who is spearheading the Stop the Torture campaign to end solitary confinement in California spoke next. She focused her comments on the 2011 hunger strikes and how the prisoners' demands are still not being met by CDCR, despite their promises of reform that ended the strike. Although they have new regulations, they do not meet the prisoner's very reasonable demands, and the prisoners have announced that the strike is set to resume July 8th of this year. She spoke about the importance of the Stop the Torture campaign and raising awareness around this issue. She remarked that perhaps the dangerous and painful hunger strike could be avoided if this issue gets enough attention before July 8th. She said that people don't just go on hunger strike for fun. Lives were lost during the last hunger strikes and people lost a lot of weight and had significant medical complications resulting from the strike. The fact that prisoners would risk their lives to bring attention to the conditions of their confinement is a testament to how dire the situation is. During our visits to Pelican Bay last week, many men indicated their commitment to see this strike through if the results they were already promised are not reached. One inmate, in describing why he would risk his life in a hunger strike, said, “It’s no life in here.”

In total, approximately sixty guests attended the event and we are hoping a lot of them will trickle in to the State Building over the next couple days for the "California Correctional Crisis: Realignment and Reform" symposium! There will be ample opportunity at the symposium to delve deeper into the issues California faces in its multi-faceted correctional crisis. To stay plugged into this issue, visit Stop Torture CA
Posted by Hadar Aviram at 10:39 PM

Email ThisBlogThis!Share to TwitterShare to FacebookShare to Pinterest
Labels: do something, events, pelican bay, segregation

So wonderful to have this event at Hastings! We need to keep having a larger conversation at Hastings about how our students' careers can end this problem...or increase it.