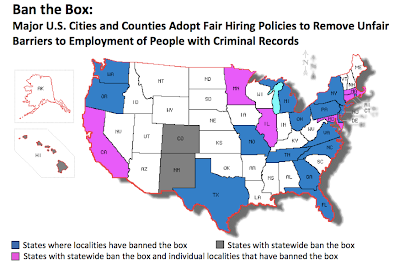 Today's New York Times editorial is devoted to the problem of screening job applicants who have criminal records.

Sixty-five million Americans have criminal records that might cause them to be denied jobs, even for arrests or minor convictions that occurred in the distant past. Last year, the federal Equal Employment Opportunity Commission reaffirmed a longstanding ruling that it was illegal to screen out employees unless the offense was directly related to the job.

The problem, however, has become so acute that a growing number of states and municipalities have explicitly prohibited public agencies — and in some cases, private businesses — from asking about an applicant’s criminal history until the applicant reaches the interview stage or receives a conditional job offer. In addition, many jurisdictions now require employers to show that the disqualifying offenses are directly related to the position in question.

The editorial links to this report by the National Employment Law Project (NELP), which lists states and localities that have adopted "ban the box" initiatives, which do not allow employes to inquire about prospective employees' criminal records. Among the localities mentioned in the report are San Francisco, Oakland, East Palo Alto, Carson, Compton, Richmond, Alameda County, and Santa Clara County. As the report explains, many of the "ban the box" initiatives are fairly new (adopted within the last seven years) thanks to the work of prison and reentry activists, and some of them were adopted during the financial crisis and despite job shortages.

As far as statewide policies, a Schwarzenegger gubernatorial executive order from 2010 ordered two questions regarding conviction history removed from the State of California Employment application.  The State Personnel Board has issued a new application, and background checks will not be required for every position. For more information about the successful campaign to bring about Ban the Box in California, read how Legal Services for Prisoners with Children spearheaded the campaign or use the toolkit available on their website.

What about private employers? The California Labor Code, summarized in this report, asking employees to provide information about arrests that did not lead to a conviction is illegal. The statues do not prohibit employers from asking about arrests for which employees are out on bail, but it seems that seeking such information about applicants would be tricky, if not illegal. Asking about criminal convictions is allowed when accompanied by a statement that criminal records do not necessarily disqualify an applicant from consideration, and asking about certain marijuana convictions (more than two years old) and expunged/sealed convictions, as well as misdemeanor convictions for which probation has been completed, is illegal.

The progress made by Ban the Box activists is astounding particularly against the background of job losses in the last few years. It's a display of fairness and equity in a setting that usually does not have much empathy for currently or formerly incarcerated people. Readers - why do you think that is? Is this a rehabilitative animus - that is, people feel more inclined to help folks who have already completed their sentences? Or is there anything else afoot?

Email ThisBlogThis!Share to TwitterShare to FacebookShare to Pinterest
Labels: re-entry

Does it? What is the relevance? Aside from specific convictions in specific matters that are incompatible with a position? Does a criminal conviction pose a barrier to, say, driving a bus? working in maintenance and/or construction?